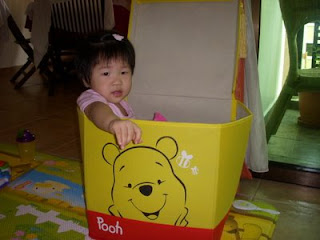 It's 22nd of the month again and our gal is now 14 months old. The big difference between now and last month is that she can now walk. She still has a tendency to fall on her bum sometimes but she seldom crawls nowadays. She has finally graduated from crawler to a toddler. :) Mummy was busy cooking porridge and gave Daddy the honours to take a photo of RaeAnne as per tradition but Daddy is such a perfectionist or minimalist that he only took a few photos so there's not many photos to choose from. ;P

Mummy can't find a detailed development milestone for 14 months old so I'll rehash the 12 mth chart to see what are the new skills you have accomplished over the last 2months. :)

Shy or anxious with strangers - Still Yes, even with relatives. Gu gu is very hurt when you refuse to let him carry you.
Cries when mother or father leaves - Yes
Enjoys imitating people in his play - No
Shows specific preferences for certain people and toys - Yes
Tests parental responses to his actions during feedings - Er, not sure. Does grabbing bowl and spoon count?
Tests parental responses to his behavior - Yes, will deliberate go close to the power switch even though I've warned her that I'll beat her backside if she touches it.
May be fearful in some situations - yes
Prefers mother and/or regular caregiver over all others - yes
Repeats sounds or gestures for attention - yes
Finger-feeds himself - yes for biscuits (12mths), now yes for food/fruits eg. bread, fruits such as apple, kiwi etc.
Extends arm or leg to help when being dressed - Yes, most of the times. Responds especially well to the mosquito repellent lotion. Will hold her leg in the air for a long time until we apply it for her.

Language
Pays increasing attention to speech - yes
Responds to simple verbal requests - yes eg. tries to give but will not release fingers on object
Responds to “no” - yes, by whining or crying
Uses simple gestures, such as shaking head for “no” - Yes, very good at shaking her head now, will even wag her little finger to emphasize 'no'. Will also nod head vigorously to emphasize that she wants something after we said no.
Babbles with inflection (changes in tone) - yes, how I wish I know what you are talking about. ;)
Says “dada” and “mama” - baba and mama are forgotten except in times of desperation when we are ignoring her especially when she is throwing a tantrum. She knows how to say 'an nah' or 'an an' for remote control or when she sees a button. Said 'bear' recently too. :)Uses exclamations, such as “Oh-oh!” - Not yet
Tries to imitate words - sometimes

Movement
Reaches sitting position without assistance - yes
Crawls forward on belly - yes
Assumes hands-and-knees position - yes, often and head too as if you are going to do a somersault. ;)
Creeps on hands and knees - what's that?
Gets from sitting to crawling or prone (lying on stomach) position - yes
Pulls self up to stand - Yes
Walks holding on to furniture - yes, but no longer need to hold onto it.
Stands momentarily without support - yes, especially on bed or bumper mat.
May walk two or three steps without support - Yes, walking without support though she still falls sometimes.

14 months (Ok, here'are the more challenging parts)
• Eats with fingers - Yes but she puts in way too much. Keep putting food into her mouth even though there's still food inside. :P
• Empties containers of contents - Yes
• Imitates others - Yes, people playing soccer or dog dog peeing with 1 leg. ;P
• Toddles well - Yes
• Initiates games - No
• Points to one body part when asked - Yes, she can point to her hair, nose, leg, hand, ears
• Responds to instructions (e.g., "give me a kiss") - Yes, she will look up when Mummy says 'up' so that I can to wash her neck. Will 'sayang' soft toy when Mummy tells her to sayang bear bear.
• Uses a spoon or fork - Yes, but the aim is not very accurate yet.
• Matches lids with appropriate containers - Not quite yet, cannot match the different shapes to the containers either.
• Pushes and pulls toys while walking Yes, she loves to push the NTUC trolley and her bicycle and the footstool while walking. :)
Posted by Piggy Family at 9:44 PM

Little raeanne is exactly a mth older than my boy! heh....

Thanks, Little Prince's mummy and Mdm 2359 and WELCOME to my blog. Just curious, how did you come across my blog? :)

Hihi...I chanced upon your blog when I was trying to google for my fren's blog which I forgot the url...its also something piggy =)