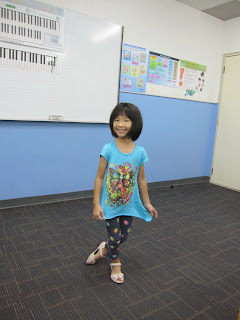 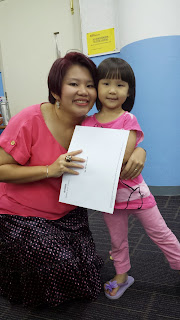 RaeAnne graduated from the Junior Music Class and Raelynn from the Music Wonderland course today. It was a logistic nightmare trying to attend both their concerts cos RA's class is 12-1pm and RL is 1215 - 1pm. Luckily, RL's teacher held a last minute 20 min rehearsal so we could watch most of RA's concert before hopping over to RL's.

RA is able to play tunes with both hands though her notes reading is still very poor as Yamaha emphasized a lot on listening and solfege. RL can't play anything yet since MW is more for her to learn music, movement and rhythm.

We have started private music lessons for RA in Nov and will be continuing with it since RA's class is not progressing onto next year. Most of her classmates are going to Primary One next year so most parents opt for private lessons to free up the weekends.

As for RL, we tried out 1 month of pte music lessons for her in Nov but her attention span is too short. Plus she only knows C, D, E. Not able to recognise all her alphabets yet. So I will take a break from music classes for now until she is ready for private lessons. Or if Mummy changes her mind and musters up enough courage next year to sit through another 2 years of JMC with her. Haha.

Raelynn performing "Won't you like to come out and play?"

Raelynn performing "Do re mi fa man"
Posted by Piggy Family at 7:39 PM No comments: 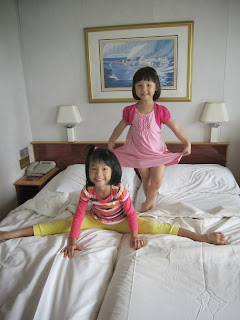 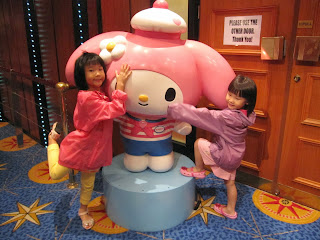 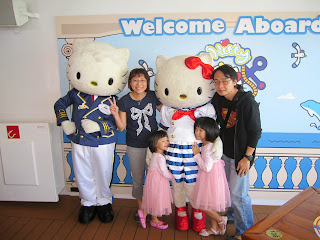 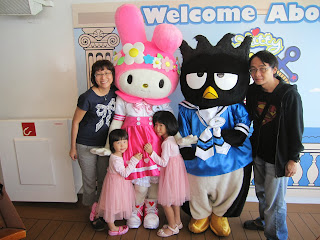 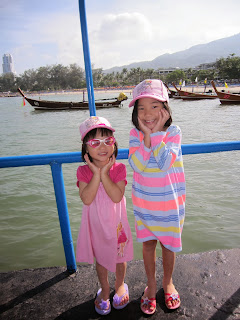 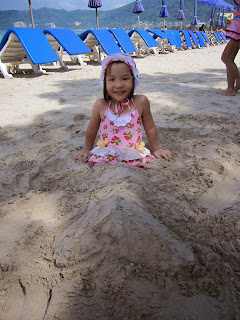 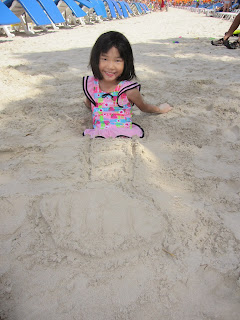 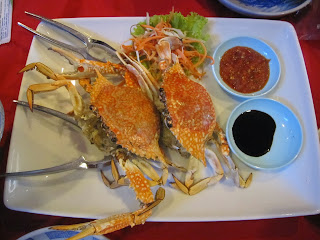 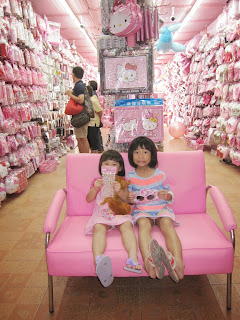 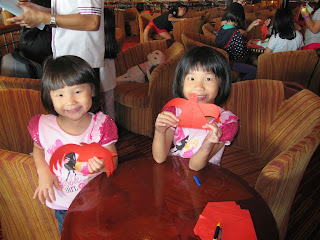 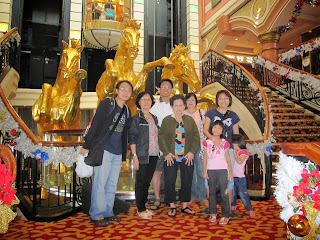 This is a backdated post cos I was so busy after my leave. Almost forgot the concept of taking leave for holidays and definitely forgot the feeling of having to clear backlog and emails after a holiday. Lol.

Anyway, the extended family of 8 (incl my mum, aunt, MIL and bro) took a cruise in December. Was planning for Australia initially but changed our minds cos my mum was worried of walking too much. Cruise seemed like a good idea since there was young and old travellers. I wanted to go to Royal Carribean Cruise since we already went to Star Cruise last Dec in 2012.

But when I heard that there was no chinese restaurants and the food spread was largely Italian with just some local dishes, I changed my mind. With 3 old folks in the cruise, it can be quite boring for them to eat bread and potatoes or pasta for 4d3n. Haha.
At least Star Cruise has a decent Chinese restaurant, I thought, better for their traditional taste buds.

When I booked the star cruise through 5 Stars, it was about $2500 for balcony cabin and about $1900 for the normal cabin. Not cheap but at least food and entertainment are inclusive so not much out of pocket. When I booked in July, there was no Hello Kitty Cruise. But in Nov, they announced Hello Kitty cruise and we were lucky that our cruise is one of the Hello Kitty cruise date. The gals are in for a treat! ;)

8 Dec
We went to Singapore Cruise Centre at Harbourfront around 1130am though check in time is 12noon. Last yr, we were faced with a crazy snaking queue when we reached Cruise Centre about 1-2 hrs after check in time. Balcony class priority was useless then cos everyone had to join the same queue. We were told by 5 stars that once we board the ship, we can have lunch. But in fact, 'tea' was served only from 130pm onwards at Mediterranean Buffet and from 2pm at Belle Vista Western Restaurant. It was mainly finger foods, pastries and curry chicken rice so my mum was not impressed. After that, we went back to our cabins to rest. RA woke up early so I brought her to the Charlie's childcare centre open house (only for 1 hour during whole cruise ie. 5pm to 6pm) to play at the mini indoor gym.

The magic show at night was by a different magician. There was less audience participation compared to last year's. So hb preferred last year's magician. :P

9 Dec
We decided not to disembark at Penang since we are going to Penang next June. In the morning, the gals had breakfast and photo taking with Hello Kitty and Friends. Then we went for a swim while the adults went to the casino or rested in the room. It got a bit boring by afternoon, I must admit so we roamed the ship looking for entertainment. Ended up going for karaoke with my bro and the old folks hidden inside the casino from 5-6pm leaving hb w the gals who were napping in the room.

Entertainment show tonight was Hello Kitty Karaoke show. Pity the old folks who were bored by this kiddy show but didn't want to break away from us. haha.

10 Dec
We disembarked after breakfast around 10am at Patong beach, Phuket and the 5 mins transfer by boat from our ship to the beach was free. We brought beach toys and let the gals spend time at the beach, then headed for lunch and some shopping. Went back to the ship just before 4pm. Time flew by. No time for a massage though they only costs SGD10. We did not get to go for Gala dinner as we tried booking it too late the night before. So, I used our dining credits and all of us ate at the Blue Lagoon café for local food. :(

Entertainment tonight was the "Somewhere in Time" Musical which the gals enjoyed a lot last year but performance this yr seemed a bit subdued with a smaller cast though the two leads were still as good at singing. The contortionist was very good too.

11 Dec
We had a leisurely day. The gals were already whining about not going home. Had to check out of our rooms by 5pm. So, we had an early dinner at Belle Vista. Our first western meal of this whole cruise which was good to me especially the braised lamb which was tender and juicy. Too bad we didn't eat here more often. :P

Posted by Piggy Family at 1:13 AM No comments:

RL is finally 4 years old. She is 98cm tall and finally hit 15kg. She has been waiting for this day for months because she wants her birthday party goody bags. Haha. That's the difference about getting older. Last year, she was still a bit blur about her birthday.

This year, Mummy decided to do a bigger celebration since they will be graduating from ELFA soon. Next year is RA's last year and RL will be the year after.

The theme is Marie Cat since she likes cats and I got a customised Marie Cat cake from a home baker and hired a balloonist for 1 hr. All in, costs about $300. Luckily, I got the goody bag items cheap when we went to BKK in September. ;)We wanted to go out after celebrating her birthday at CC today. But it was raining and both RA and I are coughing so we went to see the doctor instead. Bought a skate scooter for RL during the March Isetan Private Sale so brought her down to skate scoot for a while. :) 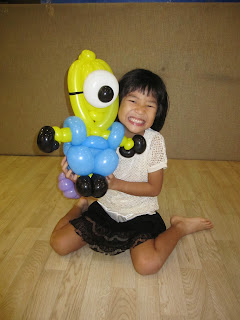 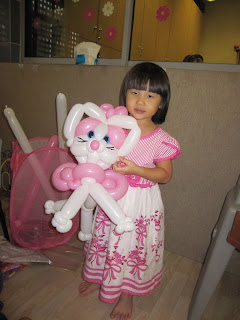 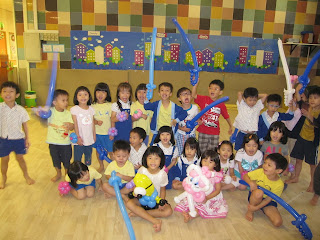 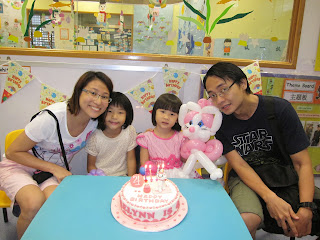 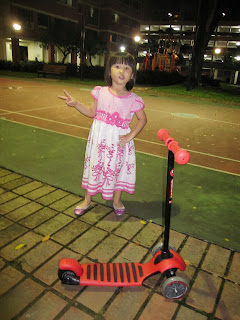 Posted by Piggy Family at 9:58 PM No comments: