I realised that I have not been blogging about RL's drawings for a long time and she has really improved a lot. Got to admit that my baby gal has grown up so much.

She drew herself, Olaf (my fav frozen character) and Daddy. And lots of swings cos she loves to 荡秋千. But somehow all the HDB playgrounds do not have swings. Hiaz... 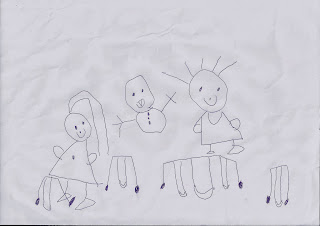 Posted by Piggy Family at 12:16 AM No comments:

We went to CCP cos wanted to get a pair of Nike shoes for RA using the voucher I got 2 months ago. But in the end, it was Daddy who bought shoes cos they have a very limited kids shoes section. If we wanted to buy something for RA and RL, they had essentially one and only design to choose from cos they were only left with mainly baby sizes for toddlers 1 yr old.

But at least CCP had a horse riding promotion with Gallop Stables. It was just a 2 mins ride cos we redeemed the Free Horse ride with min $38 receipt but it was good. Cos RL didn't dare to ride on the horse when she was almost 2 years old in Sept 11 when we went to Gallop Stables at Pasir Ris. Now she was not scared of the horse at all. They got to feed the horses with hay and even had free photo taking. Kudos to CCP! 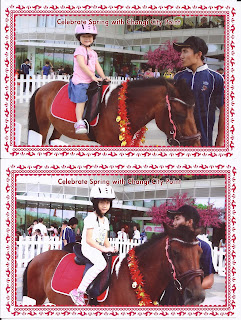 Posted by Piggy Family at 12:46 AM No comments:

First time to Gardens by the Bay and Children's Garden 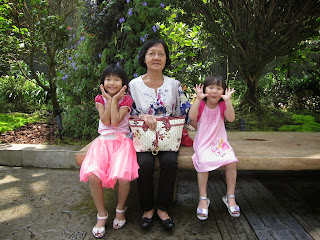 Today is childcare holiday since CNY chu2 falls on a Sat. Decided to take leave since it is also a school holiday for hubby. Let RA choose between LEGOLAND and Gardens by the bay and surprisingly, she chose GBTB. Maybe it's because she has never been there before. Bought tics from an online seller at a discount in advance. But I was so busy trying to teach RA her spelling that we left the house almost 11am.

Then the GPS didn't know about MCE and directed us the wrong way so by the time we reached GBTB, it was almost 12noon. Luckily one of my friends directed me to park at Satay by the Bay. The nearest carpark from the new Children's garden playground. So we had lunch first. A lot of stalls were not open due to CNY hols so we had toast bread and bak ku teh.

Then we had a hard time trying to find Children's garden cos we had no map and the signages were incomplete at a fork so we didn't know which direction to take. It was 1+pm by the time we found the children's playground. Much too warm for the kids to play in the midday sun so we decided to head to the observatories to cool off in the air con first.

We went to the Cloud Dome first then the Flower Dome. Lots of walking for the kids but they were energized in the cool mist and didn't complain much. There were lots of 年花 to be seen at Flower Dome so MIL enjoyed it. Maybe it was CNY period but food selection was really bad. We wanted to go to Pollen café at Flower Dome but we stood there for a good 5 mins before the waitress told us they were full unless we had reservations. Well, they should have at least put up a signage then. Zzz...

By 315pm, RL was restless and kept asking to go to the kiddy playground. So, we walked back to the Children's garden. The sky was a bit cloudy by then, so the sun played hide and seek. The children cafe also had no food. Just drinks cos they said their food supplies will not resume until Wed or Thurs. 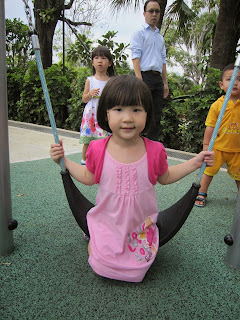 The gals spent about 15 mins at the mini playground. Only two swings (1 small and the other so small and close to the ground that it was a joke) and a very small slide. Not big enough for a crowd so kids kept on queuing for and jumping queue for the only 'taller' swings. But even the taller swing were so low that their feet brushed the floor when they were swinging. The playground is meant for kids aged 1-5 years old and RL is only 4 yrs old and about 96cm tall. So they definitely builts slides and swings meant for 1-3 yrs old.

I was getting tired of watching the stiff competition at the dry playground so I decided to let the gals go to the waterplay area. We are resisting the idea initially since RL just got better from their cough/cold. It was a big waterplay area but the set up was very basic. No slides, no water shooting guns, so trickling tiered drains like those found at the zoo. Maybe it's because it was sponsored by Far East. But it was fun for the gals who were busy trying to catch some water. 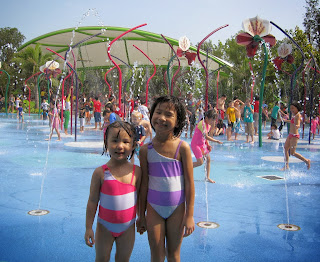 But by 4pm, RA complained that she was very hungry and her eyes are painful from the strong sun. Since there was no food sold at the Children's cafe, we rinsed them off quickly at the kids open shower area and headed back to Satay by the Bay for an early dinner. At 5pm. Lol! The kids were starving by then so they ate the yummy fried noodles, fried bee hoon by Marina View BBQ Seafood at record time. The city satay was good too. Though expensive at $0.70 per stick. MIL ordered rojak and kueh pie ti so we really had a feast.

We spent about 5 hrs at GBTB and parking was $8+. Better than expected. It was a much smoother ride from MCE all the way to KPE (TPE) then back to Tampines. On the way back, RL tried hard to keep her eyes open. Blasting frozen songs all the way helped cos they were singing to the tunes.

All in all, GBTB was fun for a first timer. The air con observatories were a nice touch and there were many varieties of flowers for nature lovers. But with pre-primary kids, the children's playground and waterplay is too small for us to revisit anytime soon.
Posted by Piggy Family at 11:21 PM No comments: