Really excited. Finally received the P1 Orientation package from Poi Ching School today by post. RA will be in the first class and her house colour is yellow. Quite expected since I know the school allocates classes by the kids' birthday months.

Turns out I actually know of 3 other kids who will be her classmates next year. One is her current cc classmate, another is a neighbour. Both of them are my SMH mummy friends. So lucky that I am already friends with the mummies so we can update and tip one another off about class matters in future. Maybe even set up a whatsapp or line chat group. The third one is RA's ballet classmate. I am not very close to her mummy. Yet.... Lol.

Orientation is from 2-4pm on 14 Nov. There is a booklist included and a School Dental Services form that parents are supposed to fill up. We can start buying books and uniforms 1 week earlier on 8 Nov (Sat). Since Sat is our 'free' day, think we will probably drop by and get the stuff first, in case sizes and stock run out. Yes, the behaviour of a typical KS Singaporean. Haha.
Posted by Piggy Family at 12:54 AM No comments:

Since hb and I could not take leave for Children's Day, decided to make it up to the kids by bringing them on a staycation. Thanks to Agoda's credit rebates, we only paid $60+ for this staycation. According to my friends, this is the refurbished hotel. Used to Paramount Hotel and there used to be a Chinese restaurant run by Tung Lok.

Didn't bother us since we were there to check out Katong, i12 and maybe visit East Coast Park. When we checked in on Sunday, it was too hot to swim though Raelynn kept asking for it. We walked over to i12 and had lunch. Decided to skip watching a movie since that will take up precious staycation time. Lol.

Then we walked back and checked out the shops at the attached Katong V mall. There was an indoor playground recommended by my friends so we dropped the kids off for 1 hr of play. After that, we passed by a art and craft centre so decided to let the gals do some art and craft and create their own treasure boxes. When we finally hit the pool, it was almost 6pm. Definitely not sunny, but we didn't realise that there was no children's pool. And the only circular pool was 1.2m deep at one end and 1.8m deep at the other end. Definitely too deep for my gals so they were a bit freaked out. Luckily we brought along floats and even made use of the life buoys by the side of the pool.

After a swim, we walked over to the Katong stretch of eateries and ended up at Le Petite café. They serve French food. It was not bad but the gals were too tired to really enjoy their food. So we left immediately after dinner to let them have an early night.

Sleeping was a bit of a problem since I only booked a superior room. So there was only 1 King bed. With RL being a shadow kicker, RA did not get much sleep so I didn't get much sleep either. Luckily it was only for 1 night.

Buffet bf was included and it was not bad. The otah was recommended. They have an eggs and noodles station too. We decided not to take the shuttle bus to the beach since it was hazy. So the gals just had another shot at the indoor playground, it was time to check out. After check out, we walked over to Parkway parade for lunch leaving our car at the hotel. So it was really convenient.

All in all, we like the hotel especially the location. The only complaint was that there was no bathtub in the superior and deluxe rooms and bathtub is a highlight for my kids. Only for the expensive Peranakan room, the guest can get a huge round bathtub in the middle of the room. But that is at double the price of a superior room. Since the gals love staycations, if there are any offers in future, we will come back. :) 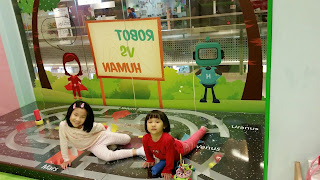 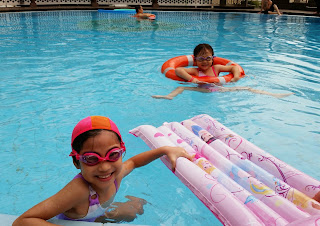 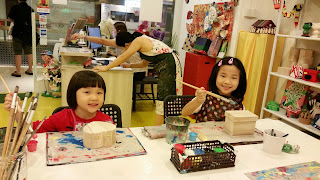 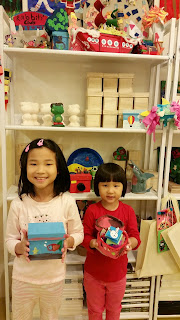 Posted by Piggy Family at 10:59 PM No comments:

The weekly spelling and the painful coaching by us made me realise that she needs help to catch up to speed for English. Maybe because she is a Dec baby or because she has not been paying attention in class.

I asked around. 'I can read' and 'Learning Point' were recommended but there were no centres in Tampines. A mummy friend recommended 'Lcentral' at CPF building, Tampines. I like it that they were ability based so there will be free assessment for each kid before they are put into a suitable class.

After the assessment which parents get to sit in, RL was assessed to be suitable for the most basic class - Foundation whereas RaeAnne was good for 'Preparing for Success'. In the end, we signed Raelynn immediately. RaeAnne only started last Sunday for Term 4 as there was a new PFS class on Sunday mornings with the same timing as Raelynn. Logistically, it is easier to drop off both kids and we thought it is good to give RA some exposure as well.

Lcentral fees unfortunately are not cheap, $560 per term for each kid so it works out to be almost $200 every month. But we have never given the gals academic enrichment so far. It is more out of necessity because RL cannot catch up with her peers and we don't want the gap to further widen. Hope we can see improvement after 1 or 2 terms then we can cut down on lessons. ;)
Posted by Piggy Family at 1:35 AM 1 comment:

Ballet coaching started today but RA did not go. Simply because I did not sign her up. Have been asking her for the last month, but she has been saying no to Ballet exam (Primary). She said it's too difficult and her teacher cannot accompany them for the exam. I told her she will have a partner but she does not want to do exams. She just wants the usual Sunday morning ballet class.

Last year she was the one who requested to stop globalart and she was also the one who asked for ballet in May 2013. I tried to persuade her because I felt I should not encourage her to keep changing her mind and giving up when things get tough. After all, she already did the Pre primary ballet exam in April this year and all 4 of her classmates who went for the exam this year have also signed up for next year's Primary ballet exam. In fact, this time, 8 of them signed up. It seemed a waste to stop halfway.

She said she wants to go back to globalart because her cc classmate is there. But GA's Friday lessons clashes with Ballet coaching. So I brought her to globalart yesterday but her friend's class on Friday is full. Even if I sign her up, she won't be in the same class as her friend. So she was not keen.

I don't know if I am making the right decision by letting her skip the ballet exam. So hard to strike the right balance between allowing a child to quit due to lack of interest or just registering her for exams because she needs to learn hard work and commitment. I asked her ballet teacher that RA may not want to do the exam but all her teacher said was "She's still young".

Ok, maybe 6 years old is probably still young for me to force her to commit. I have given her a chance to learn ballet and to take ballet exams. If she forfeits her chance, so be it. Since she is entering primary 1 next year, she will have less time for enrichment. Plus, Her first piano exam will be in March/April 2015 (same timing as ballet exams) so guess we will just concentrate on piano for now.