It's been more than 2.5 years since I quit my full time job. The last few weeks I have finally transitioned back to being a FTWM. It have been crazy after I join the project teams for 2 condo projects. One is Arc@Tampines, an Exec Condo and the other is The Luxurie at Sengkang. Burned so many weekends and weekday nights camping outside the site or outside MRT station giving away flyers and explaining to passerbys on the condos. RaeAnne thinks my full time job is a flyer distributor. When she saw Arc@Tampines flyers on the floor in our estate, she told me: "Mummy, your flyer". Had to tell her that that one is not Mummy's face so it's not my flyer. haha.

Today, was selected to join the team to serve walk in customers at The Luxurie. Very lucky to get the chance since I'm not experienced like the rest of the old timers. It's a good experience serving walk in clients especially when I was one of those visiting Baywater showflat long long time ago.

Finally closed my first deal for rental today. Record price of $2700 for a 4rm unit in Tampines. But most importantly, I got the tenant profile that my landlord wants after answering more than 40 calls, shortlisting only 9 tenants for viewing and he only liked 2 tenant profiles. Finally, signed the tenancy agreement with the one who was renting at the next block. Talk about fate. haha.

Feel guilty towards hubby and especially the gals cos I really hardly have time with them since I started doing projects. Mei Mei gets it worse cos she will be at MIL place whole day from 11am till 9+pm. At least, for RA, we spend the evening with her after picking her up from CC at 6pm. Still working hard to find work life balance cos I have just started out on this career so got to be more 'piah' to expand my network. :P
Posted by Piggy Family at 11:58 PM No comments: 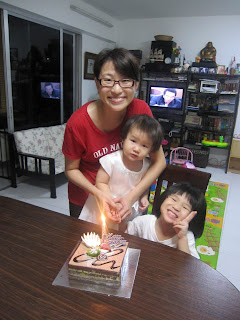 Last night, while at ILs house, RaeAnne was calling me, then I heard a lower, muffled Mummy. Wondered why RaeAnne's voice sounded so low, and turned around, then I heard it again. It was Raelynn calling Maa Mee. The first time since last year when I heard her call Mummy... Before this we have been trying for months, but when either Hubby or I ask her to call Mummy, she will point to me instead to indicate that I am her Mummy but she has never opened her golden mouth to call me. :P Asked her to call Mummy again last night and this morning, she said Maa Mee, Maa Mee repeatedly. Music to my ears. And it is really a timely birthday present for me. :) 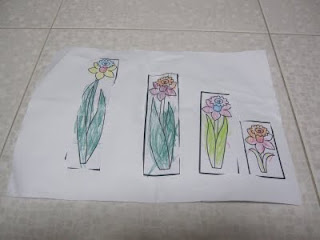 My birthday morning started early at 5+am, with RaeAnne peeing on her bed but hubby helped to wash and hang the bedsheets after I rinsed it. But she did redeemed herself, by doing a flower artwork for me as present. It was actually supposed to be homework for her show & tell tomorrow. But since it's a flower, asked her to do it for me as my birthday present. Glad to say that she did it all by herself, from colouring to cutting and pasting, with a little bit of help from Mei Mei, who helped her to colour the shortest flower. 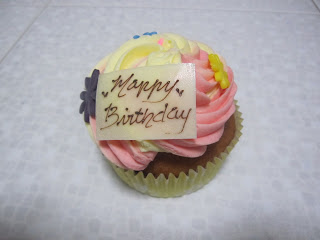 In the late morning, hubby brought the gals to ILs house. Hubby and I had a peaceful buffet lunch at Carousel, Royal Scotts on Plaza. Hubby even arranged for them to surprise me with a birthday cupcake. :) We had Curry fish head dinner at the CC foodcourt for dinner cos needed to buy a cake at Prima Deli and bring to ILs place. Bought a cake and brought it to ILs place for cake cutting with the gals cos we had forgotten about MIL's birthday last week on 31 July. Asked RA to sing a happy birthday song for Nai Nai first. Both RA and RL loved the cake though it was chocolate mint, keke. A relaxing and rewarding birthday indeed. :)
Posted by Piggy Family at 12:27 AM No comments: