Today, RA just had her yamaha class concert, she's a bit distracted cos so many pp in her classroom (even Nai Nai came to lend her support) but at least she did not have stage fright. Compared to the first time she performed a dance with her playgroup classmates at 2 yrs old, must say she really grew up. Too bad, she is still not ready for unaccompanied enrichment classes though. -_-

Brought her for ballet trial at Crestar, Abacus Plaza but she did not want me to leave the room. How to sign up like that? Anyway, we decided to start private swimming lessons on Sunday morning at Tampines swimming pool. I think $300 for 2 tots is quite steep but hubby said we just go for it. The gals have been having cough and cold nearly every month, we spend a lot of $ bringing them to see dr anyway. Since, swimming supposed to strengthen the lungs, we will try it out and see if it improves their health.

Next yr, she is starting on Yamaha's Junior Musician class so we need to get an instrument for her to practise but I'm not sure which instrument to buy. The full height piano costs $5-8k. If I buy a piano at $3k plus (supposed to last for 10 yrs), will she lose interest? If I buy a digital piano at $1k plus, will I end up having to top up more if she does have the interest. Dilemma.
Posted by Piggy Family at 4:55 PM No comments:

So fast, we have said 'I do' 7 years ago. 七年之痒? I definitely think it is up to us to make our marriage work forever, hope never to lose that loving feeling even though we are so busy looking after the kids without a maid for the last 6 months and harassed by our 2 night birds gals who sleep between 11-12 midnight daily and shuttle in our busy daily routines. Especially hard on hubby who gets only average of 5 hrs of sleep everyday cos his working hours are super long as a teacher.

Happy anniversary Dada! 辛苦你了! :)
Posted by Piggy Family at 12:29 AM No comments:

Last week, I took my eyes off RL for 3 mins while she was cutting paper with a tiny pair of scissors at ILs place cos I went to the toilet. When I came back, I was surprised to see thin strips of black paper on the floor. Was wondering to myself how could her fine motor skills be so advanced to cut paper so accurately. Then I had a rude shock, the stuff on the floor was not paper, it was her hair! This naughty gal had tried to imitate Nai nai and cut chunks of her hair from both side off. Although there was no obvious ugly hole at the back, but her hairstyle was definitely disproportionately layered so Nai Nai had to remedy the damage. So she trimmed her hair very short and now she looks like 'ah dude' with coconut head hair. There goes my hope of taking a family photo in dec since I signed up with Pic perfect at Suntec in July when taking my ERA photos.

Today, she wanted to cut paper so I took out RA's Kumon workbook for her and tried to teach her to cut. She only managed the first cut so had no patience cutting lines. Then when I tried to help her cut out a pineapple shape, I turned around and saw that she did it again. She cut a tiny chunk of hair off again. I beat her hands and scolded her this time but she didn't even bian zui nor cry. Not repentant at all. Grr... no more real scissors for Mei Mei, only plastic scissors from now on.

Evidence of her holding strands of hair in her fingers and proudly admiring her masterpiece... Maybe, she wants to be a hairstylist in future? :P 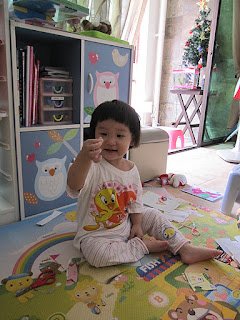 Posted by Piggy Family at 12:12 AM No comments: 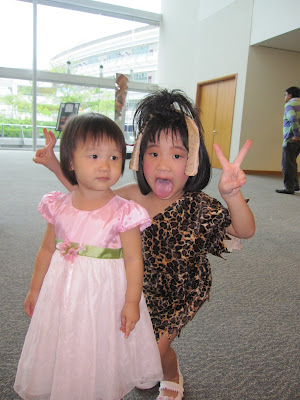 Her dance piece was I like to move it move it by Madagascar. She is sick with flu but managed to perform with the help of panadol. But I went to backstage and brought her home shortly after her performance though the concert has not ended so that she can rest more at home. :)
Posted by Piggy Family at 11:17 PM No comments: 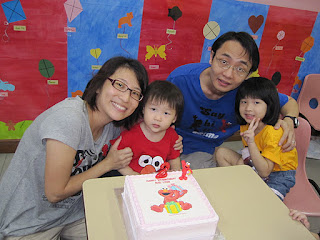 In terms of speech development, she can say short sentences. Some of them very well eg. I want 这个. Me, me, Mine. I want Mummy 抱抱. 找奶奶, 找Mummy. I want take/throw/jump, I want 穿裙,I want 穿鞋, I want cheese. 姐姐打. Oops! :P

Physical development - she can climb very well much to ye ye and Nai Nai's constant worries. She will dance and move to the music. She can take aim and throw a ball. She can walk with alternate foot on the staircase if someone holds her hand. Her favourite part is jumping off at the last step. :)

Social development - strangely, she is not as sociable as before. Eg. she will say hi five to certain close family, but no longer does it with school teachers and admin. She will still wave bye bye to everyone she doesn't know though. :)

We had her school bd party early yesterday cos today is RaeAnne's Elfa CC year end concert. Strangely, Mei Mei refused to eat her birthday cake though it was strawberry flavour Elmo cake from Polar. Previous yrs, we always ordered from Prima Deli cos it was the nearest bakery from our home. She did blow out the candle on cue though. :) 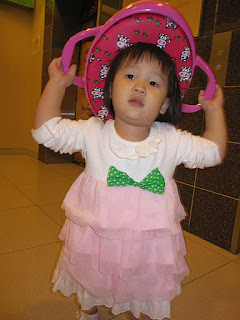 Bought 2 presents for her, one Elmo toy guitar that costs $36.90 (b4 30% discount) and a Elmo colouring pencil set that costs just $3 from Toy R Us Warehouse sale. She took only a few glances at the toy guitar but instead both gals clamoured over the $3colouring set. When we brought her to Toy R Us, she picked a pink cow potty seat and refused to let go of it so we bought it for her as bd present from the grandparents since they gave her ang pows. She went around holding her potty seat in her hands using it as her hat or trying to sit on it like a rocking horse. Quite a sight at Tampines Mall and hubby was quite embarassed. Moral of the story, it doesn't take much to satisfy a kid's imagination. ;)

But she stopped using it as a hat after her head got stuck in the potty seat ring when she was playing with it at home. :P
Posted by Piggy Family at 10:43 PM No comments: