Back from our stayacation with the gals and MIL at Festive Hotel. Checked in on Thurs and made use of the Mastercards promotion 3d2n with 2 free Universal studio tics and 2 free Voyage De La Vie tics at $590. I had to rush out 1 hr after checking in to see the Bedok Residences showflat on Thurs at 430pm.

Came back to Resorts World at 7+pm, gobbled down Pu tien fried bee hoon and fried rice which hubby tapowed earlier. Then booked a spa treatment last minute and enjoyed a green tea scrub and aroma massage at Spa Republic on Thurs night so that hubby and MIL can bring the kids to Voyage De la Vie. Only 2 tickets anyway. They left the show shortly after cos hubby said the show too quiet and the kids were too noisy. Luckily, I didn't join them. Keke. 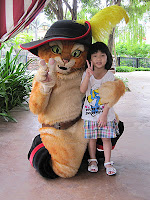 Next morning, had bread from Breadtalk. Then we went to USS at 10am on Fri. Not that much crowd but still need to queue 5 mins for entry. RA went for 6 rides (boat ride and merry go round at Madagascar, Shrek 4d & Donkey Live show, Dragon kids roller coaster and Mini Ferris Wheel at Far Far away. RL only managed the first two rides but she didn't enjoy them nor does she like taking photos with the characters. She kept crying. Maybe she's too young or she was hungry. I was surprised by RA cos she said she wanted to go for the Dragon ride but I dun think she realised what a roller coaster was. Even I closed my eyes throughout cos I am always freaked out by roller coasters. She had a blank dazed look after the 3 mins 'hell ride' but I am really proud that she did not cry or scream during the ride. After I told her she's so brave, she said "I want mummy 抱抱." kekeke.

RL ko at the park at 3+pm, so we came back. But after we reached hotel room, she woke up cos hubby put her down on the baby cot too suddenly. So, MIL was the only one who managed to catch a siesta while we entertain the gals. Decided to go for international buffet dinner at Hard Rock hotel with MIL since we seldom get the chance to dine out with her. Per pax was $68++ but luckily got 10% discount for Masters card. The kids dine free since below 4 yrs old. Phew! Food was ok, not the best buffet we had. Couldn't load our plates with the sashimi and oyster and other seafood cos MIL didn't like us eating cold, raw food. hehe.

Then at 8+pm, we slowly walked back to USS for the fireworks show. We were just in time, cos it started at 9pm instead of 930pm which we were told by the hotel reception. The fireworks were beautiful, RA enjoyed it but RL was a bit frightened by the loud sounds. Came back at 9+pm and had an early night at 11+pm.

All in all, quite a good experience. Both gals enjoyed climbing up and down the loft bed which freaked MIL out. RA had her fill of her favourite bubble baths at the bathtub. RA had 3 bubble baths in 3 days. Didn't let them go swimming since both were dripping mucus and coughing.

Only comment was there there is not enough food variety at USS and the hotels. In the morning, the one and only Toast box had a long queue cos there was nowhere else for bf. At the huge USS foodcourt, there were only 4 types of food, laksa, wanton mee, chicken rice or kids nuggets meal. For dinner, variety outside was ok but hotels, it was sad. Imagine there was no restaurants serving buffet at our own Festive hotel so we had to walk over to Hard Rock Hotel. :P
Posted by Piggy Family at 6:41 PM No comments: