Brought the gals to their first play at Esplanade today. It's one of their playtime programmes called 'What a Noisy Zoo'. It was their first experience sitting on the floor with a raised stage in front of them, people dressed up in costumes dressed as zookeeper or animals. Due to the floor seating, their view was blocked by taller kids in front who couldn't see cos they were blocked by the kids in front of them. Not an ideal situation for tots aged 2-4 yrs old cos they are already shorter than other pp in the first place.

But at least the play was interactive so lots of kids are shouting, singing and dancing. Not mine though, Mei Mei pooed in her diapers when we first went in and there was no time to change her unless we miss the 40 mins play so we let her be. RL didn't understand much anyway and she was too short to see anything so Daddy carried her to the back where there was 1 row of chairs. RaeAnne joined Daddy and Mei Mei at the back half the time.

But I think she did enjoy the play cos after she came back, she kept telling me that she went to the zoo, even told Nai Nai. And she said the monkeys are very naughty cos they took the zookeeper's keys and ran out of the zoo. She even asked me which animals in the zoo fell asleep (the segment she missed cos she went to look for daddy) but I had no idea either cos I was busy chatting with the other Feb mummies. kekeke. :P

4 tickets cost $50 so each ticket was just $12.50, slightly more than a movie ticket so I won't complain even though both kids weren't very enthusiastic. I was glad we didn't have to waste the tickets cos the gals, hubby and me took turns to succumb to stomach flu. Mei Mei brought back the bug on Fri, then it quickly spread to RA, ILs and us. Luckily, we recovered enough to go for the play though I'm still feeling queasy due to my gastric problem triggered again by this bad bout of stomach flu. RA did complain that she missed her music class a few times though so I told her next time if Mummy brings her for a play, I will make sure it won't clash with her music class. :P
Posted by Piggy Family at 2:20 AM No comments:

Raelynn gave me a shock last night when i changed her diaper for her. She told me ng ng after she stood beside her cot bed for a while so I knew she pooed. What I didn't expect was the huge amount of sticky blood on the poo. It wasn't a bit, it was a lot. Took a pic before wrapping up the diaper cos thought may need to consult PD or GP.

Problem with Raelynn is that she doesn't like to eat fruits nor vegetables (not even evergreen favourites like strawberries or golden kiwi or apples, papaya or watermelon which RaeAnne loves. So, she has hard stools once in a while. But the strange thing is that last night's poo in her diapers wasn't hard. It was quite soft actually. Hubby googled and think it's an anal fissure. Possible, cos I've seen a slight crack before but that was a long time ago. Maybe it got worse. Asked MIL to give her more fruit juice but she suggested yakult. Don't think that will help with her cough. But don't know which is the lesser of two evils now. :P

Tried a new strategy in order to make the gals sleep earlier. Got hubby to bring RL into the bedroom to sleep since she refused her bedtime milk feed (as usual). I kept RA with me as I hang the clothes (Had to do laundry cos RL's mamy poko diaper leaked again last night, too loose? :P). While I showered, I made RaeAnne do colouring in my bedroom so that she won't go and disturb Mei Mei. By the time I finished shower at 10pm, hubby was successful and Mei Mei had slept.

Was feeling good when I brought RA into their bedroom to sleep at 10pm. She talked non stop but in hushed tones cos I told her not to wake Mei Mei up. She finally fell asleep close to 11pm. But who knows, I saw Mei Mei sucking her thumb and pull it out, she hardly does it nowadays unless she is hungry in her sleep. She started to fidget, scratch herself all over and in the end, she woke up. Arghh!!! Think she was probably hungry so I made 200ml of milk and she drank all. After I left to wash the milk bottles, she didn't go back to sleep, and started to call 'Mummy... Mummy...' from the bedroom. Bo bian had to ask hubby to go back and settle her cos I need to do work tonight.

Morale of the story. Next time, must ask hubby to dreamfeed after putting her to sleep... -_- 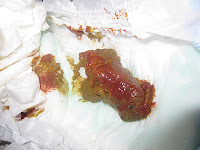 Posted by Piggy Family at 11:39 PM No comments:

Haven't measured the gals for a long time ever since I stopped taking monthly photos for RL, just too busy after Maid left. RA is now 99cm tall, while RL is 81cm. :)

RL's birthday is just 2 months away. We will be having a party at her school and it's time to think about birthday cake designs. She really loves Elmo, loves her red Elmo socks (it's cute to see her wearing t shirt and diapers plus elmo socks), loves her Elmo music player book, and Elmo sticker book. I already bought party packs fillers 2-3 months ago from the party shops outside Bugis Junction so I am not going to change that. But at least I can find an Elmo cake for her, luckily Polar Cakes has sesame street theme so that's not difficult. Need to collect cake early in the morning though. :P

Brought the gals to Bedok Point for the first time cos suaku Mummy never been there before. We ate at Kungfu Paradise and the gals enjoyed the Mui Fan and esp Mushroom soup. RL started a runny nose, while RA started a slight cough, even Hubby. Sigh, think I'm the guilty one passing the bug cos I have been sick again since Monday. After 2 rounds of antibiotics for the previous 2 weeks, usual GP didn't want to give me any more antibiotics. But the runny nose, sneezing progressed to blocked nose and coughing after 5 days. Think I need to see dr again tom. Sigh. When will we stop cross infecting one another?
Posted by Piggy Family at 1:15 AM No comments: