Mr Lee Kuan Yew, the Founding Father of Singapore, passed away at 3.18am at SGH today. As Singapore wakes up to the sad news and mourns his loss, flags around Singapore including schools flew at half mast. I asked RaeAnne if she knew that the very important person whom I told her about, has finally passed away today.

She said the Principal told that a leader of Singapore has passed away. That's why the flag is not going all the way to the top as usual. I asked her if she knew the name of the leader but she didn't. And she didn't know who was he and why he was important to Singapore.

I think that's really sad. So I showed her video clips of the PM's address at 8am which I missed as I just reached office and had to login quite a few screens to get to the CNA live feed. The special documentary programmes that paid tribute to the great man and what he did to build Singapore to what it is today. But I don't think she truly understands at 7 years old.

She was also clueless when her Ah Gong passed away when she was 4 years old. My Papa was born in 1928, 5 years after Mr LKY was born. My dad was 83 years old when he passed away. If he was still alive, he would have been 86 years old. My dad was the generation who witnessed Singapore's transformation from the kampung state to the modern city state.

My dad came from Swatow China as a Chinese immigrant to find work but ended up staying here for good, became a hawker, got married and started a family. We are not well off when we were young when my dad's business at the market grew poor due to the resettlement of rental flats. But my brother and I were the examples of how education and meritocracy will lead us out of poverty.

My dad once whipped me with two canes tied together when I refused to go to school on the second day of Primary 1. I had studied at a Chinese PAP Kindy and could not understand what my P1 form teacher was saying. But my dad was not one to coax and cajole. Our parents frequently told us, "Study hard. If not, you will become a road sweeper".

After that painful experience, I did not dare to say "I don't want to go to school" anymore. I studied hard at Alexandra Estate Primary School (which closed down for good in 1987, I was the last batch of students to graduate from there), and got into good secondary schools. My brother got into RI and I into Crescent Girls. Both of us got into university though our parents did not even complete primary education. Both of us went to NTU, my school fees were paid through the PSC Loan and my bro through other loan schemes. Truly after both of us graduated, life got better. Like many of the older generation, he respected Mr Lee Kuan Yew.

Every year during National Day, my dad will hang National flag at our flat. If the flag gets faded, he will buy another one to hang. My father is not the demonstrative nor sentimental sort so I was surprised that he would do something like this to demonstrate his love for Singapore.

My dad never went back to China. Not even to visit his only sister and cousins. After I started working and could afford it, I asked him before if he will like to go back to visit. But he said he doesn't feel a need to do that. The successful Singapore that Mr Lee Kuan Yew helped to build has become a real home to him.

I have never met Mr Lee Kuan Yew in person. And I may not agree with all PAP policies. But I am grateful for what he has done. I hope my daughters' generation will also be grateful for his vision and dedication towards Singapore, though they will not have the chance to meet or get to know him anymore.

Posted by Piggy Family at 12:25 AM No comments:

March holidays are coming to an end. We didn't do much this time because of RA's piano exam and because hubby has many block test scripts to finish marking. So I only took 2 days leave. 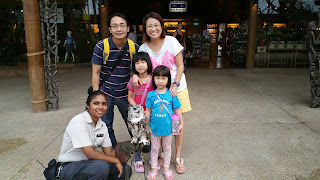 We went to Night Safari on Monday night. Got the free corporate passes through balloting. Finally got lucky. We encountered the famous woodlands to Causeway jam at around 545pm so yes, next time better go very early or very late. :P

Reached the Night Safari at 620pm. Time to grab dinner. Missed the 645pm fire show as there were no seats left at Bongo burger. We ate at the food court instead. Food is v exp there. $18 for roast duck/chicken noodles set with some veg. Bongo burger was better value. At least it's western food even if the prices are similar.

We went straight for the Creatures of the Night show at 730pm. First time watching it. RA likes it cos there are funny games and antics for this show. By the time we finished the show. Night has fallen so it was very dark. Roads are wet cos it rained in the afternoon. So we decided to take the tram ride.

The 40 mins tram ride took us to see the lions, tiger, flamingoes, elephants, Tapir and lots n lots of different deers. By the time we finished, it was 845pm. So we decided to just go to Bongo burger for a snack and wait for the 9pm fire show. A family of 4 including a very inconsiderate mother decided to just pull chairs from all around and sit right in front of our table to watch the fire show. And no, they did not order anything from the restaurant at all. Even put their pram right in front, blocking our view. Super buay zi dong idiots!

Anyway, by the time the fire show and we finished our supper, it was 930pm. We went to look around at the gift shop and left the place at 10pm. Had to fight hard against the zzz monster who was knocking RL out in the car. She was very grumpy when I kept trying to wake her up but she was the one who refused to nap in the afternoon. Grrr.... 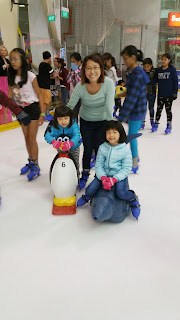 We drove down to Jcube cos I had promised to bring the gals ice skating ever since some of my friends went and posted pics. We didn't know there were scheduled slots. We reached at 11+am so was too late for the first session at 1030am. So we went for brunch at a nearby Taiwanese restaurant which overlooked the skating rink. Tickets and rental of boots, skating aids etc were not cheap. Gloves cost $2 each. In total, we paid $99. Luckily we already saved money from the Night safari admission tickets on Monday. If not I will really feel the pinch.

Ice skating was really difficult. We rented 2 skating aids for the gals but I realised I need one for myself. haha. We only lasted 1.5 hours though we paid for the 2 hr session. Hb and RA both had blisters so it was painful to continue. Blame the ill fitting skating boots and our inexperience. My arms ached after that cos I was holding to RL's penguin for dear life and it was way too short for me. After that, we walked over to Westgate where they had a good free playground at level 4. It was nice but RL jumped around too recklessly and cut her lips. Sheesh, 3 injuries in 1 day. What an accident prone family we are. So it was time to head home and rest. :P
Posted by Piggy Family at 11:58 PM 1 comment:

RA went for her first Grade 2 piano exam today at 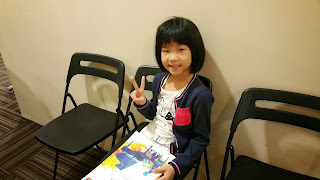 Juzmusic Parkway Parade. She has been taking private piano lesson since Nov/Dec 2013 after finishing Yamaha's jmc course. Quite long to prepare for a 15 mins exam. She was quite nervous but hope she passes. We will only know the results in 3 weeks time.
Posted by Piggy Family at 1:17 AM 1 comment: