RaeAnne got the I look smart award at the end of Term 2. Must be because of her short fringe and short hair. She only received her badge when Term 3 began. She is happy to wear it everyday. Haha. 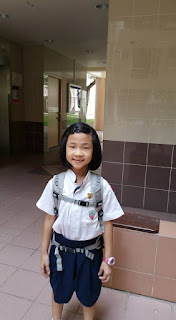 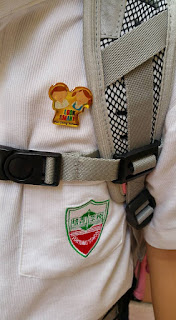 Posted by Piggy Family at 10:34 PM No comments: 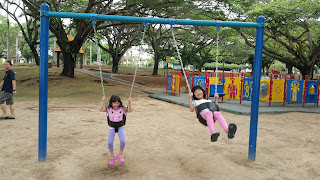 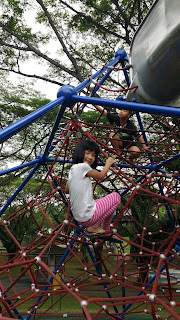 RL didn't have her usual LC class last Sat so very happy that we had a free day on the weekend. That has not happened for a long time. Initially we were thinking of camping at ECP but that still felt a bit too ambitious because we didn't know if the gals can sleep on the cold hard bumpy ground without their bolsters and soft bedding. lol. Luckily we didn't do it cos it poured from the wee hours of Sat morning. We would have been drenched if we were out in the open on Fri night.

So instead we went to Pasir Ris Park. We brought the gals' skate scooters along intending to skate scoot at the park but got stuck at Ehub for a long time.

Had breakfast at a Taiwanese eatery run by non Taiwanese. Can tell immediately from their accent. Lol. Then we went to Downtown East and spied the Megabounce that the gals are really into. They tried it for the first time at Sentosa during June hols when we went to watch the Peppa Pig musical. Then again at Bali WaterBom water park so they were very happy to see it at downtown east.

Unfortunately, it wasn't open yet so we walked to the beach instead. Let the gals skate scoot. Tried to find a playground and we ended up walking all the way to the playground near Elias Road. Really far.

Got tired out so after the gals had a go at the swings, we walk to the nearby "5 Drunken Rabbits" for a waffle and fried chix wings. The wings were really good. Super crispy. Even nicer than Ikea's.

We walked back to Downtown East at 3+pm and luckily the Megabounce was opened. The gals jumped on the Megabounce as well as the normal Trampoline. It was $8 per jump for NTUC members. Then after that we went back to E hub to buy takeaway pizza for dinner and the gals got to go on the motorised animal rides just outside Explorerkidz. We finally reached home at 5+pm.
Posted by Piggy Family at 1:56 AM No comments: