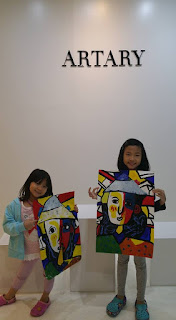 The gals started art classes at Artary in Sept. They have been taking classes at Globalart for 1 yr, 2 yrs for RA. Felt that it's time for a change cos Globalart is very focused on colouring and blending with crayons and very guided by the teacher. I think it's good when the gals are younger and their fine motor skills are not strong. But now that they are almost 6 and 8 yrs old. I think they should be more independent.

Until now, RA can't blend on her own despite 2 yrs at globalart. The gals enjoy painting now. So I switched them to Artary which focuses more on painting. Fees are similar, $37.50 for 1.5 hrs class. Only thing is don't need to buy the books at Artary unlike Globalart as all materials are provided.

So far, they have done a few artworks. Will try out until Dec and see if we should continue next year since both gals are entering primary school and they get art class once a week. :)
Posted by Piggy Family at 12:53 AM No comments: 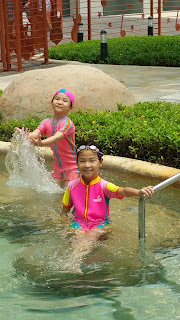 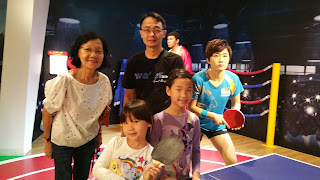 We were lucky to see a good offer for Hard Rock Hotel so decided to bring the kids for a staycation. Mil came along too. It was good that Hard Rock Hotel's hotel room has double beds and a pull out bed so it was big enough for 5 of ua.

We had lots of fun. This time we did not go the RWS attractions since no free tickets were included. Instead we tried the Luge and Mdm Trussards' Wax museum. The Luge was fun, $51 for all 5 of us. RL is below 6 so her ticket is only $3. Mdm Tussard's wax museum is really expensive though, 5 tickets costs $178. Almost enough for a staycation at a Far East hotel. Faint!

It included a 40 mins play about History of Singapore that is only in English using real actors but speaking in Singlish. Kids and MIL were bored. Some parts were even scary as the kids have to cross a dark forest with sounds of roaring tigers. Wish they skip the part and just sold us the wax museum part. We took many pics but yes, once is enough.

We took so long at Mdm Trussards that we are half an hour late to check out. Luckily, the hotel gave us 1 more hour and extended our checkout to 130pm. Which is a good thing because I promised to let RL swim again before we leave the hotel. :)

Posted by Piggy Family at 1:33 AM No comments: 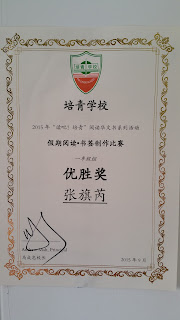 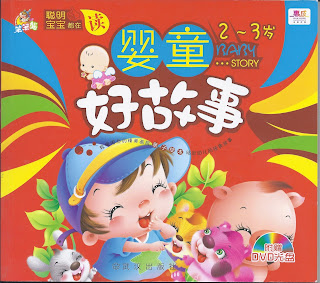 Thursday was RaeAnne's school celebration of Children's Day. She came back with many presents. From her form teacher, Mrs Teo Lee, she got a purple teddy bear key chain. Secretly, she preferred the white and gold one. Lol. Her Chinese tcr gave her a notebook so that they can write more Chinese. But the best present for her was getting a 优胜奖 for the bookmark competition that she submitted after June holidays. She made a Chinese bookmark for 我的猫宝宝。 She said she was very excited to receive the certificate and prize from Mr Mah, her Principal. Proud of you, RaeAnne!

Another of her classmates, Gerrard also received a prize. The school did not return her bookmark n I couldn't find the photo taken in June. The most interesting thing is the prize she received was a Chinese storybook for 2-3 years old. Hb jokes that maybe in China, it is a book meant for 2-3 years old. But in Singapore, it is only Primary 1 standard. Lol.
Posted by Piggy Family at 1:05 AM No comments: