I had 2 adult tickets to SEA aquarium after signing up for RWS Invites earlier this year and I thought I had 1 more Adult and 1 more child tickets from Friso promotion too and they were expiring on 27 Oct so decided to bring MIL there with the gals since it was PH today.

It was a rainy morning, thunderstorm since early morning so by the time we reached USS it was already 1030am. Had some snacks at the Fish and crab shack while the gals enjoyed watching the Zheng Ho show again and again. RL was frightened by the roaring Pixiu dragon head initially though. haha. 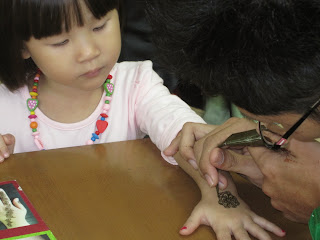 As we walked in, RL was fascinated by the henna tattoo so she had a beautiful motif done on her left hand. That costs $8 but strangely RA didn't want one. The crowd was building up by the time she finished. Glad I had the RWS invites card to jump queue. But due to my booboo, the friso tickets had already been used on 16 June, hubby and RA had to go buy the tickets again before we can enter the aquarium. 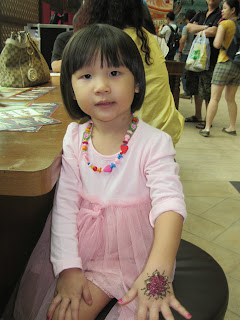 It was our third time to SEA aquarium so the gals aren't exactly thrilled but they enjoyed looking at the big round column of circling fish, sea jellies, dolphins and touching the sea stars (not star fish as the staff corrected us sagely. "You don't call turtles turtle fish, do you?" Err.... turtles have 4 legs or flippers so of course they don't look like fish right?), and of course 'picnic' in front of the oceanarium pool. 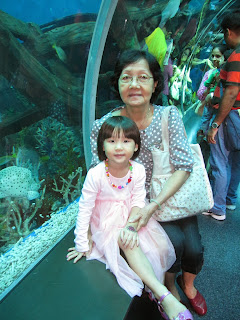 RL was tired of walking rather early cos both she and RA insisted on wearing heels. Ended up carrying her very often at SEA aquarium. Note to self: must insist they wear comfortable walking shoes next time. We wanted to have high tea buffet at Starz restaurant but for some strange reason, it was not available. Only lunch buffet which ends at 2.30pm. It was already 2.10pm by then so it was pointless. Went to Coca restaurant instead since I had RWS invites rebates dollars to redeem. 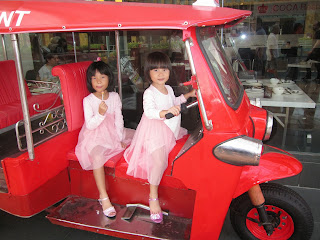 The gals whined and fussed when we walked past the Hard Rock pool cos they wanted to play in the pool. Had to pacify them that we will come again. I have already booked Equarius hotel for end Nov for 3d2n staycation so that we can go to USS again before RL turns 4 years old. Admission is free for kids below 4 years old. Haha.
Posted by Piggy Family at 11:28 PM No comments:

Legoland for the third time

It was a busy weekend for us. Last Sat afternoon after our PV duties, we joined our neighbours to go to LEGOLAND again. Glad to go again since we already signed up for the annual pass. As long as we go there twice, it will be worth it. It was all clear at Sg customs but JB's side we had to wait about 1 hour. Luckily, we had already fixed our car air con ($1500 flew away) so at least it was a cool n comfortable wait. RL ko before we reached SG customs so she had a nice 1 hr nap until we reached LEGOLAND. 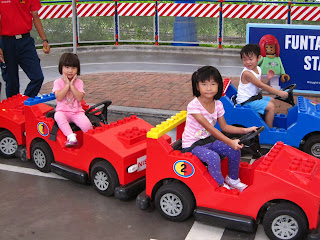 This time, we went straight to Lego city as we didn't cover the last time we went. The gals tried the Junior Driving school car drive meant for 3-5 years old. They were quite bad cos they don't know how to straighten their wheels so they kept going around in circles. I think even the instructor gave up as they kept banging onto the curbs and getting stuck. Haha. 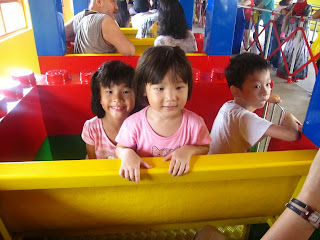 Then we went to watch the magic show before going for the big train ride. All 3 kids sit in 1 carriage so the adults got to relax and enjoy the ride. haha. RL really wanted to go to the slides at the Shipyard playground so I brought her there while Daddy accompanied RA and followed Lijia's family to the Fire engine station. After that, we queued up for the boat ride. RA was equally bad at steering the boat so we kept bumping onto the barricades as well. We even got sprayed with water by one of the 'ambush' spray jets. Daddy and RL gloated away cos they were in front of us and thus safe and dry. So mean. :/ 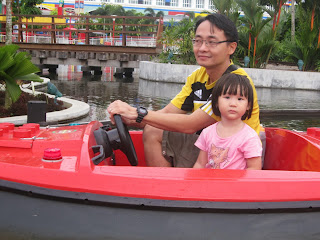 After that, hubby tried his hands at the basketball game again but failed to win the blue, square angry bird that RA wanted. Think they set the standards higher since we last went in Dec 12 when he won 2 birds. We took a few rounds at the dizzying aeroplane ride cos RL really liked it.

Went for the 4d Chima show and joined Lijia's family there. Got sprayed by water again. Geesh... I should start wearing a poncho to LEGOLAND. But luckily the gals enjoyed it though RL's 3d goggles kept slipping off. We went to the Duplo playground again and the kids took the mini train ride themselves. RL sat in one carriage all by herself while RA shared one with Lijia cos all 3 kids only wanted the red carriages and there were only two red ones in the whole train.

Walked past the mini city, then a short stop at the gift shop before we went for dinner at Secret Recipe. The lamb shank was cold inside so I had to ask them to reheat. But other than that food was good. It was already 1015pm when we left and we were the last 4 cars remaining. Luckily, there were 2 security guards there but I wonder if we were making them work OT if they can only knock off after all cars leave. :P

Got Lijia's Daddy help to update our Garmin GPS so hopefully next time we can try going to LEGOLAND on our own and maybe we can visit the new LEGOLAND water park soon. ;)
Posted by Piggy Family at 11:03 PM No comments:

I just realised that I never blogged about this before. But I was accepted to be Poi Ching school's PV and started duties somewhere in August. I never thought I had to be PV but this year's Phase 2C was too competitive. 25 people were balloted out and they were all Singapore citizens staying within 1 km.

For the past years, SCs within 1 km had always been safe from balloting. Even the P told me that last year when I was still doing contract teaching at Poi Ching. Since I don't have a plan B (hb's alumni school Ngee Ann Pri was too far away), it was really important for me to be a PV to increase my chances. Luckily I had sent in my application early last year plus I was an ex staff.

We need to clock 60 hours. Most school require only 40 hrs so that is 50% more. But I heard St Hilda's require 80 hours and they also interview their PVs and select only a handful. So I am glad I am given the chance to be PV. My neighbour who realised too late how competitive this year's P1 registration would be, was not even accepted as PV cos the school said registration was already closed.

At first, I thought it would have been easy since I was a SAHM. What I didn't realise that I would take on a temp part time job in end July and this temp job is now converted to a contract position. So, I had to keep taking no pay leave to do my PV duties. But
I always thought PV duties are things like traffic marshall duties, clerical duties or even bringing kids on excursions. But surprisingly, the PV duties I encountered at the school were none of the above.

To those who are curious about what PVs do. Here's what I did so far:
1) Accompany P4 kids with their form teachers to pick rubbish from nearby park
2) Teacher's day celebration (lead the P1 kids in games in their classrooms) so that teachers can have their buffet lunch
3) Lantern Festival (help to sell tickets and school bears)
4) Monthly birthday celebration partie just last Sat (Games I/c)

Together, with hubby, we only clocked about 30 hours so far. Just hit our halfway milestone. Most of the 2008 PVs we spoke to already almost graduated cos they started way earlier. Stressed. Hope I can clock the 60 hrs soon so that I can qualify for phase 2B registration next year.
Posted by Piggy Family at 10:40 PM 3 comments: