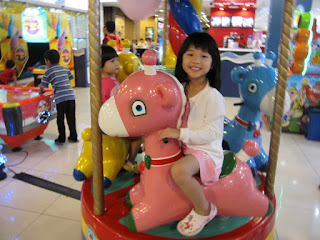 I just realised that I forgot to post about our Penang trip in Sept 12 when one of my forum friends asked me for the itinerary. Shows how busy (lazy) I have been since starting work full time. :P Anyway, better late than never right? haha.

Day 1
Took airasia flight to Penang, my tickets were bought 1 yr ago in Sept 11 during the zero $ promo but I added two more tickets for my mum and aunt last minute cos they wanted to go to Penang too. This time, quite disappointed with Airasia cos the flight was delayed by more than 30mins and there was a substantial turbulence dip. Enough to make a few kids (myself included) scream.

We Stayed at G Hotel again, it is our third stay there and their service and quality has been consistently good. When we reached the hotel, just nice to check in and enjoy our complimentary ice cream by the hotel. After putting down our luggage, we had a nice dim sum lunch at one of the chinese restaurants at Gurney Plaza (next door to the hotel). Unfortunately for me, I started a bad bout of flu on the day of our departure and I had full blown symptoms (bodyaches, chills and fever) so I rested in the hotel room while the rest continued shopping.

That night, we strolled to the nearby open air gurney food centre for dinner. RaeAnne was very whinny though, maybe cos she was tired and also cos she is not used to such 'no frills' street dining. 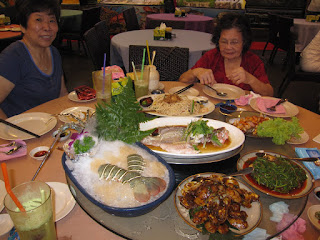 Day 2
Still feeling sick, but luckily it is still our F&E day. Took a cab and visited the nearest Tesco, bought some kiddy high heel shoes and slippers there. The gals enjoyed the rides at the amusement park at Tesco, luckily the rides were in RM not SGD so still ok. Then, we had lunch at Swensons. Popped into the pharmacy and got a stronger med for my flu and esp sore throat. Booked couple spa for my mum and aunt, this trip I did not enjoy any massages cos wasn't feeling up to it. Sigh...

We went for seafood dinner at the nearby Bali Hai seafood restaurant. Food was fresh and good like the last two times we went and I had my favourite belinbing juice. Sourish sweet, though it looks toxic green. We spent SGD200+ but also because we had lobster, and also I was super greedy (feeling better with the stronger med) and over ordered for 4 adults and 2 kids (2 veg, 1 fish, bamboo clams, fried lala, 2 crabs cooked in butter and black pepper, fried noodles, 1 lobster, sashimi style n lobster miso soup). We ended up tapowing the butter crab, and fried noodles for supper. ;)

We had an interesting stir fried vegetable that we have not seen before in Singapore. Looks a bit like super fat dou miao. And I was curious of the taste so even though we already ordered fried spinach, I added this veg. No regrets, we loved it so much that especially went to the market to search for it the next day during our 1 day tour.

Day 3
I booked a private day tour with http://rasamalaysia.com/penang-private-tour-and-culinary-tour/ for all of us and the guide picked us up in his mini van in the morning. We went on their culinary tour in 2009 when I was pregnant with Raelynn and it was a good experience esp the Penang laksa at Air Hitam was unforgetable. This time, since my mum and aunt have not really toured Penang before, we asked to go to the local market, taste local hawker fare, buy 'tao sa piah' from Him Heong, go to Batu Ferringhi beach and visit butterfly farm and fruit farm. 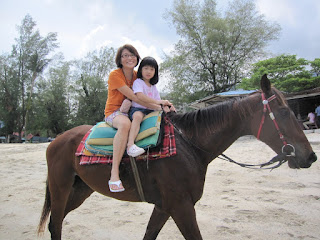 We were so happy shopping at the local market, bought dresses for the girls at RM10. Nice ones that costs double in Singapore, while my mum and aunt happily bought veg to be brought back to Sg the next day. End up, we were a bit late departing for Batu Ferringhi beach. The guide brought us to Hard Rock Hotel cos they have a private beach. RA took a horse ride with me while RL was happily picking seashells with hubby. We took a photo together with the horse, but RL is freaked out when the horse started to move. :P Then I went to Hard rock shop cos I wanted to buy a souvenir Tee. Initially wanted to buy for the gals too but prices were too steep. Definitely chop carrot type so I only bought one for myself.

About 1 hr later, we went to the fruit farm. Actually, the guide tried to persuade me not to go to the fruit farm cos he feels tickets are overpriced. But my mum and aunt are fans of fruit farms so I decided to just go ahead. By the time, we reached the fruit farm (it's at the other end of the island), the guide told us we cannot reach HIm Heong by 3pm to collect my preordered tau sa piah. So, we called and pushed back to 5pm collection instead. The fruit farm tour was ok, don't think my mum and aunt enjoyed as much cos it was in English as there were quite a few caucasians who joined the tour. But the gals had fun trying out the different fruits and it was the first time all of us saw a dragonfruit tree. We also had a fruit buffet at the end of the tour and that ended up as our lunch cos we were so rushed for time so no time to stop for lunch. RaeAnne even planted two longan seeds near the buffet area and we said one day we will revisit the farm and see if her longan trees have grown. ;) 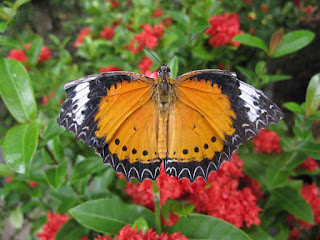 After the fruit farm, we went to the butterfly farm. The gals enjoyed this most of all. They were awed by the 'up close' encounter with the many different types of butterflies and colourful caterpillars and it was an air conditioned enclosure so very comfortable to walk around. There were short 5-10 mins animated clips airing at the mini theatrette. We watched one on ants and one on snails and the gals refused to budge, had to force them to leave.

Then, we went to the reptiles n insects live exhibits area and the gals were not afraid of the creepy crawlies at all, unlike Mummy. ;P After that, we walked through the souvenir shops, spent too much at the handicrafts shop for some wood carvings cos we didn't realise there is another 'real' souvenir shop further down. Duh...

By the time, we finished with the butterfly farm, it was almost 5pm. Confirmed not enough time to collect my tau sah piah. And the guide informed me that Air Hitam penang laksa closed for the day liao. boo hoo hoo.

On our way back to Gurney drive, we passed by a durian roadside stall. The guide told us it is much cheaper to eat durians at the hillside compared to the city area so we decided to try it. We ordered just one durian and it was huge, the 4 adults had problems finishing it. Forgot the price though. :P

By the time, we reached our hotel, it was 7pm. We were debating whether to go out and eat but in the end, decided to order room service so that we have time to shower and pack our luggage for our morning flight the next day. We ordered Nasi Briyani, spagetti, Seafood hor fun. It costs about RM90.

Day 4
The guide sent us to the airport for RM60 but he detoured to Him Heong for us to get our tau sa piah. We ended up with two boxes of them, 1 big and 1 small. It was raining by the time we reached airport, and after that it was raining so heavily that the flight was delayed by 1 hr. On our return trip, we exceeded luggage weight limit (I bought 25kg). So in the end, we had to rearrange the luggage and we decided to check in the big box of tau sa piah to max our luggage allowance and hand carry the smaller box. Wrong decision cos in the end, half of the tau sa piah were crushed during transit. Morale of the story, buy only enough for handcarry, don't be greedy. :P
Posted by Piggy Family at 1:38 AM No comments: 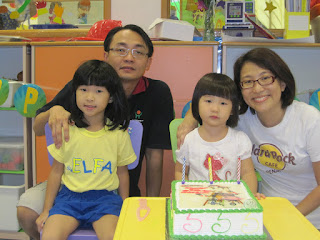 Raelynn turns 3 yrs old this Sunday. Thurs is their school concert and Friday, CC is closed. So, we decided to celebrate her birthday early today on 28 Nov 12. Hubby was on reservist but managed to get early release today so we went over to the cc at 3.30pm. :) She chose the theme of Madagascar 3, her favourite movie (she didn't like Ice Age 4) so I bought partyware from Partycity and ordered the Madagascar cake from Prima Deli. She chose the cake design herself too. Teacher Angela said she told them that her cake is Madagascar, when she asked her in the morning. But she didn't believe her. She even insisted this morning to bring her favourite white 猫猫裙 (she likes it because of the sparkly design in front). haha. We had RL's PTC last Sat, and she is 91cm and 11kg. Still featherweight like RaeAnne... :P We bought her a bicycle a few weeks ago and she could ride on 4 wheels. Hope they can learn to ride on 2 wheels soon so that we can all go out in bicycles.
Posted by Piggy Family at 12:17 AM No comments: 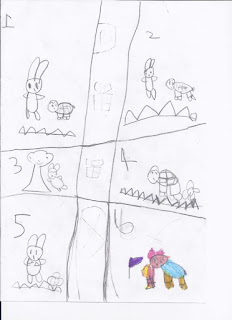 RA drew her first comic yesterday. 龟兔赛跑,haha. Can tell that hubby is secretly happy with his daughter's first comic. haha. I asked her is it because teacher teach her to draw or did the teacher read her this story yesterday, that's why she drew this. But she said no, she drew it from memory.

I am secretly relieved too cos I nearly fail art in my school days. If at least got 1 kid likes drawing and comics like hb, I won't feel guilty. And the fact that she can remember the illustrations of the book shows that, at least never waste my efforts to read them story books at bedtime no matter how tired I am... Hubby asked her why never colour everything, she said because she does not have enough time... haha.

RA showed me this picture, she draw the purple stick figures with the crayola paint brushes. Was about to throw it away (cos looked quite messy). Then she said, Mei Mei drew this one. Which one? The pink one!

Took a second look, wa... finally RL can draw something that resembles a face instead of just scribbles. She used to scribble or doodle and tell me that it's a boat or an aeroplane but it looks nothing like it. She is turning 3 yrs old this Sunday and looks like she has finally progressed to draw her first stick figure though it looks like an alien head still. But at least it's something recognisable. Haha. 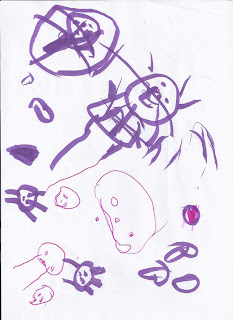 Posted by Piggy Family at 12:37 PM No comments: