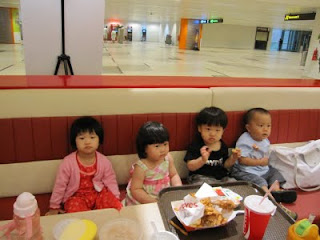 We went to T3 again this morning to meet Hannah, Kelyn and Jess and their kids: Johanna, Rayden and Javier at Popeyes. So fun to see the kids again, esp Johanna and Rayden. They look so grown up since the time I saw them at LNT, Parkway parade in March 09. ;P Brought stir fried macaroni for RaeAnne's lunch and some extra for the kids. Luckily, RaeAnne was quite happy to eat it. The kids took some time to warm up, RaeAnne's Elmo musical toy was a hit especially for Rayden and Johanna. Glad that she was willing to share her toy. :) 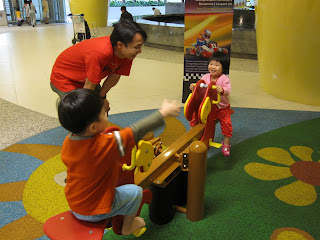 After the brunch, we brought the kids to the indoor playground and they all had fun there. Don't know who is this 'gor gor' that RaeAnne is playing see saw with but she had a beautiful smile for him. Not shy at all compared to when she was with the other Jan kids. She likes older men? Hee ;) RaeAnne was very fascinated by the water jet fountain and insisted on touching the jet sprays, dirtying her fingers. But I thought it was good to let her experience that. ;)

She was very grouchy in the car on our way back cos we missed a turn and what should have been a 10-15 car ride becamse 30mins at least. She was crying so badly that she almost puked so I asked Filamie to release her from car seat and pass to me so that I can calm her down. When we got back, hubby showered her. I had no time to put her to sleep cos rushing out to meet the BP organisers to collect my Thermos items and nachos before 2pm. Went to NTUC to buy stuff to cook dinner too. Ended up cooking spinach with chicken drumstick soup and stir fry mixed capsicum with chicken fillet. RaeAnne has her usual steamed threadfin with vegetables. She loves soup so much that she's drinking it by putting her mouth to the bowl directly. So 豪爽，Faint! :P 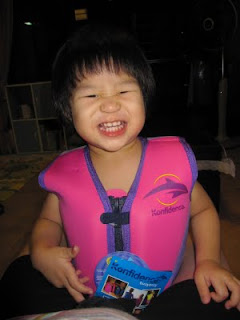 In the evening after her dinner, I let her try on the Konfidence flotation swim vest cos I wanted to see the sizing. Gosh! Looks like she can wear it now though the size guide is 2-3 years old. Maybe it's because it's so bulky. She loves it so much that she fussed and cried and screamed when we wanted to take down the vest before her shower. Had to pacify her with a basin of water and bath toys before she allowed me to finally take it off. Duh. :P

Filamie finally got her letter from husband today, together with 2 photos of her son and son with husband. Can imagine her joy. But I found 2 dirty rice bowls this evening, had to tell her to wash properly next time. :P But at least she got dinner ready at 6pm while I was having my nap after I gave her instructions. Considered as improving lar.

We want to start preparing to put RaeAnne onto the toddler bed to sleep. Hubby is afraid that she will fall down from the bed so he wants to sleep with her, not convenient for him and the maid to be in the same room so Filamie got to sleep in the living room for the time being. Anyway, I already told her on the phone before she came that she will not haver her own room so she was mentally prepared.