This morning, Mummy received a missed call when bringing RaeAnne to playgroup. Saw that it was a Bedok tel no., thought it was Daddy but when I called back, it turns out to be Carol from Bedok North NTUC calling me to tell me that she gave me the wrong info yesterday. There is Friso 3 promotion after all and today is the last day of the promotion. 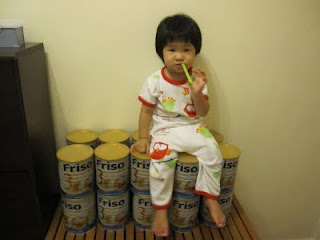 Told her to reserve as much stock as she has for me so that we can collect this evening. She managed to keep aside 20 tins for us. There were so many tins that they had to keep the stock in the office in a carton. Hehehe. Thanks to Mummy's Jan08 forum friends for the tip off on Friso 3 promotion (2 tins for $35.95) cos it's not available at Tampines Mall or the nearby Tampines Central CC NTUC.

Phew, now RaeAnne has enough cheap Friso 3 to last her till next year liao. No need to worry about the pricey new formula Friso 3 that costs $25.45 even when it's on offer. :)

P.S. When I picked RaeAnne from playgroup today, I found her in a pink t shirt instead of her normal yellow uniform. Asked teacher Chris and she said she was playing with water while drinking from her water bottle and got her shirt all wet so they changed her t shirt for her. Naughty gal. She looked very pleased with herself somemore. Kept pointing to her T shirt and inside the shirt when the teacher narrated the incident to me. ;)

Oh ya, RaeAnne's diaper leaked/overflowed? last night around 245am. Think she must have been drinking a lot of water and soup recently (cos she's taking rice instead of porridge and sometimes the dishes are a bit salty) and we didn't change her diaper since her shower at 8pm. Tonight, we changed her diaper close to 10pm and it was already so heavy. Must make effort to change her diapers after her last milk feed. :P
Posted by Piggy Family at 11:51 PM