Blogging from Penang cos hotel room has free wireless and wired internet access. Took airasia flight to penang this morning, luckily the flight was smooth. I was quite worried cos it's budget airline.

Took an airport taxi to G hotel for RM38, arrived around 1 pm but our deluxe room was not ready yet. Booked a deluxe room initially cos needed a bathtub to bathe RaeAnne but in view of the worsening flu situation, we did not bring her. Also wanted to have a real holiday with hubby before no. 2 arrives. Met up with my ex colleague who is also staying at G hotel with her hubby and 3 kids. We had lunch together at Kofulou chinese restaurant and she even treated us to lunch. Dim sum was ok, I had century egg porridge while hubby had meatball porridge, decent serving for only RM4, cheap cheap. :)

After lunch, I had a haircut at Janzen (only RM37 = SGD15+), one of the cheapest haircut I had in a long while. Then we went shopping and hubby and I bought each other a present as souvenir. I bought him a toy while he bought me a cable organiser. We also bought some sleeveless rompers for RaeAnne at only RM7. :)

Came back to hotel to check in at 5+pm and source for a nice restaurant for dinner. Went to Shangri-la Rasa Sayang resort at Batu Ferringhi beach for a nice dinner cos it's me and my hubby's dating anniversary. When hubby called for reservation, the staff asked if it was a special occasion. Hubby told them it's our anniversary. End up they gave us free sample of appetiser, lime sorbet, free chocalate cake and free chocolates. Hubby and I end up being so stuffed, love the service, the chef came to speak to us a few times too. Will definitely go back there again.

P.S. What really made my day was hubby finally wore the pink shirt I bought for him eons ago. I wore pink too to match him though different colour, felt like back to couple days again. ;) 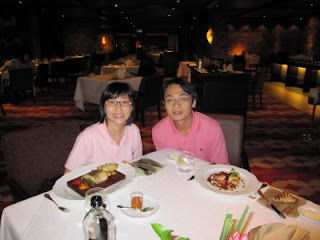 Very sweet looking couple with the pinks on :-) Enjoy your holiday!

Thanks, Kam. Hopefully the shirt won't be put back to cold storage now that we are back in Sg. Hee. ;)