Had a work function today, a staff celebration party. Decided to go though it's RaeAnne's 7 months 'birthday' today as I have missed bonding with my colleagues after office hours since RaeAnne was born. Rushed to ILs place at 820pm from Clarke Quay, taxi fare costs me $20 bucks because of the city surcharge cos I didn't manage to catch the office transport. Reached Ils place only at 9pm. But even $50 is nothing if I get to see my darling. Hee. ;)

She looks a bit blur blur when she saw me. But she soon warmed up and wanted me to carry. After dressing her up a bit to take a nice 7 mth photo. I weighed her for the record and she was only 7.2kg today. MIL didn't believe it and weighed her personally but it was accurate. RaeAnne was 7.3 kg when I weighed her on Wednesday, hmm... where did the 100g go? Did my darling lose weight again?

I quickly nursed her around 9.15pm as she was hungry. After she drank her fill, I carried her for a bit before passing her to ILs as I needed to pump. Hubby is coming home very late today so got to leave RaeAnne at MIL house. Felt quite guilty to leave her at ILs place on a special day but bo bian. Sigh, I came home on my own at 11pm as hubby was not going back with me.

Here's a pix of RaeAnne at 7 months! Starting to look more like a girl as her hair gets longer? Forgot to add, her recent milestone 2 nights ago was pulling herself from sitting position to standing position with support. According to the "What to Expect in the First Year book", it was a feat that not all 7 month old babies can do. Jia you gal gal! :) Unfortunately, she still can't sleep through the night because she doesn't know how to self soothe. :P 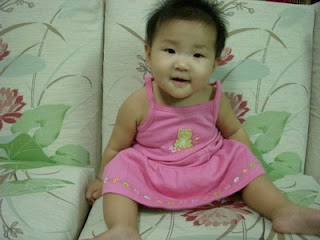