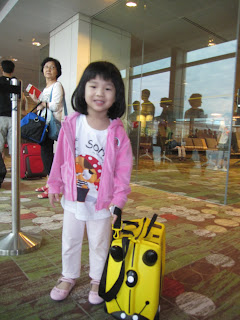 I was too tired to post last night, having slept just 2 hrs on sun night, partly because hubby was marking n didn't want to sleep early n partly cos Raeanne woke up at 2+am n didn't settle until 3+am.

Day 1
The plan was to book the cab n have it waiting downstairs while the adults load the luggage so that we let the kids sleep as much as possible. But in the end, had to wake a sleeping Raeanne at 6am cos mil said must let her pee before going up the taxi but as I expected she was grouchy n refused to pee. She only peed after we reached the airport n checked in. Mei mei on the other hand only woke up when she was in the cab. The flight was short n smooth though Raelynn was a bit grouchy towards the end. Think she was hungry. Booked a taxi n a half day safari tour for the next day.

Luckily we reached the Marriott Mai Khao Beach slightly after 9am. We were welcome by jasmine lei but waited at the lobby for a long time. Even had time for Raeanne to do some coloring at the Kids Club. It is open to all kids but only those above 4 yrs old can be left there alone. Our room was still not ready by 10am so we decided to head straight to Turtle village and we had breakfast at coffee club which was a recommended cheap n good place for Thai n western food. True enough, the thai mains were cheap, only 100thb, which was SGD4.20.

Ordered a soupy rice with minced pork ball for Raelynn n Raeanne, asked for no salt but it was still too salty. Next time, should ask for no salt. But no prob, just asked the waitress for hot water, n diluted the soup. They ate a lot cos very hungry by then. The hotel called us just after we ordered the food but we wanted to eat first. Decided to go to the Turtle Mart supermarket to stock up on fresh produce before going back to the resort so that we can cook. In the end, we bought some frozen chicken drumsticks, small cabbage, fresh mushrooms, baby corn, a papaya. I had brought from home rice, dried scallops, dried silverfish n ikan bilis for stock. Too bad, the pork didn't look fresh or we can vary our cooking a bit more.

When we saw our room, everyone was wowed cos it was so big. The rooms are big n the kitchen is well equipped with 4 electric cooker stoves, rice cooker, kettle, blender, toaster, microwave oven. It even has washing machine n dryer n ironing board. I. Managed to go to the spa at the nearby JW Marriott hotel while everyone else had their afternoon naps. The 2hr massage was relaxing but steep ($200) but I expected it but at least it was convenient. After I came back, the kids showered n we went for dinner at Turtle Village again, this time at Bill Bentley pub. the ribs were great n food servings were large. We shared a bottle of Thai Singha beer since it was the same price as fruit juice. Mei mei had her first Phuket hotel cooked soupy rice n she ate a lot. :) Went to the supermarket to stock up again, bought macaroni n bee joon this time.

I ko at at 10+pm thailand time (1 hr later than sg time) with Raeanne. Ironically, though the guest bedroom was so big with 2 twin beds, she ended up squeezing with us. :p 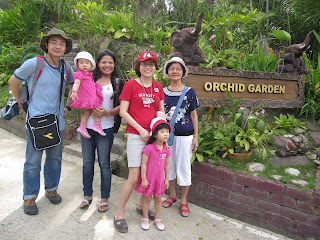 Raeanne woke up early cos she has not adjusted to Thailand time but we were still almost late for our 9am meeting with the guide. It was a 45 mins ride to Island Safari but RA fell asleep in the mini bus. The ride was quite windy and I was a bit nervous due to the effects of our car accident. Kept worrying that the driver will misjudge and the kids will be in danger. Paranoid. :P 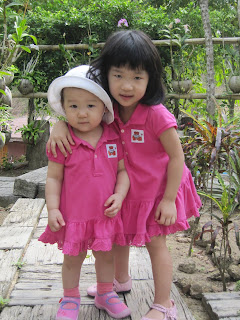 We did a lot at the tour, ox cart ride, orchid farm (not much blooming orchids), photo with buffalo, Thai papaya salad demonstration, monkey show, baby elephant show, elephant ride. The kids were tired n hungry but we took the opportunity to feed them at 1pm when choosing photos. On the bus ride back, it was Mei Mei's turn to sleep but Raeanne did nap for a short while.

When we reached hotel, the adults had cup noodles while I cooked some miso soup macaroni for Raeanne since she didn't want to nap anymore (used instant miso soup as base). Then we watched the panda dvd that i bought from singapore. Wanted to bring the kids to the swimming pool but it was hot n later found out the pool is closed at 6pm. So I cooked dinner instead, chicken apple soup, fried lettuce with mushroom n carrots, n canned teriyaki sardines with fresh cucumbers. The kids love the soup n apple n Raeanne ate two small bowls of rice. :)

Hubby went to the Kids club to borrow some DVDs n while Raeanne n MIL watched Lion king, hubby n I sneaked out for ice cream at Swensons n shopping at Turtle Mart n Jim Thompson. RA fell asleep on the long sofa just now but woke up to cry, think will have to let her sleep with us again. :p Tom is the last day n we have no plans except to bring the kids to the pool n the beach. :)
Posted by Piggy Family at 11:55 PM