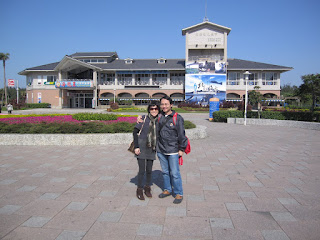 Went to Taipei with hubby from 7-11 Dec without the gals. Left ILs house at 11+pm on Monday cos I 'bu she de' the gals and went back at 9+pm to latch Mei Mei. End up RaeAnne refused to sleep until 11+pm so hubby and I were stuck in the living room/balcony feeding mosquitoes in the dark.

Day 1 - The SQ flight to Taipei was good and smooth. We reached Taipei at 1pm as scheduled and the tour guide picked us up. We were very lucky to to be the only 2 people on this semi F&E itinerary (booked with SA tours) so we had a personal tour guide 杨先生. He was a knowledgeable and responsible tour guide but with a sharp tongue when you ask 'stupid' questions. But he explained before that Taiwanese tend to speak like that ie. they are very straight but they mean no harm. Tour guide told us that the next 2 days will be very cold because of the cold winds from China. Great, I thought. :P

Around 3pm, we arrived at Cosmos Hotel 天成饭店, location was very good, near to the Taipei Railway station and the Taipei MRT station. Many 7-11s nearby too. But I think the room was very small and they don't have wifi facilities. :P Given a choice, will book Caesar Park Hotel next time.

Had to pump cos it was more than 14 hours since I pumped and I was engorged (had blocked ducts after day 1). Then we went for late lunch at 4pm at 何记 near M8 exit which served very good 生煎包,蚵仔大肠面线 and the smelliest 臭豆腐which I tried in Taipei. The shengjianpao was only 10NTD each which is about SGD0.40 and it was very juicy so we loved it so much that we went back on our last day to eat and even tapow 3 back. Then we went to Ximending on our own as suggested by the tour guide and ate so many street snacks along the way that we were too full to try the famous Ah Zong Mian xian. The sun starts to set at 5+pm cos it was winter and by 6pm, the sky was completely dark. I needed to use a toilet so for dinner we ended up eating at Meiguanyuan Jap food restaurant. The sashimi there was very generous, super thick slices but I thought it didn't taste as sweet as those we had in Singapore.

Day2, we met with the tour guide at 830am (SO EARLY!!!) and we went sightseeing with him driving us, we went to Yeliu's rock formation, Jiufen, old mining city near the sea (loved the ru3rou4fan4 and drunken chicken beside 阿信的店), then time on our own and we went to ShinKuang dept store within walking distance to our hotel. There were 13 floors and we were very lucky they were having their anniversary sale. I bought SKII there cos it was even cheaper than Singapore's duty free shop at departure hall. Bought some toys for the gals too. Best of all, there was 5% tax rebate. :)

Day3, it was an early start again at 830am, and we went to see the changing of guards at Martyr's Shrine (9-930am) and then to Lover's Bridge (very bright day with blue sky), they were building a huge Ship hotel near here. Then, we went to YangMingshan for a hot spring experience, we forgot to bring our own towel so we had to pay $10+ for a white bath towel (why didn't the tour guide remind us? :/) Then we went to Wufenpu, but we hardly bought anything cos it was the wrong season plus very few children's clothing shops. Then we went to Raohe night market for dinner. :)

Day4, finally a later start to the day today, at 1030am, tour guide drove us to Taipei 101 and we had lunch at the Italian restaurant there at the 85th floor for the free view. Initially, we wanted to go for dinner since it was a hazy day but the tables near the windows were fully booked so we decided to go for the cheaper lunch deal instead. Paid about $42 per head. Food was good and I got so sleepy. hehe. Took the free shuttle to the MRT station and went to the Sun Yat Sen Memorial Hall, the sun was starting to set by the time we left there. Then we went to find Jay Chou, Mr J restaurant, it was so ulu and difficult to find. And the restaurant was so empty that I wasn't keen to eat there for dinner but then it was only 530pm on a Fri so maybe that's why it was so empty. :P Went to Sogo (fuxing branch), thought we can shop and have dinner there but was surprised that there was no toys/children floor there. Initially, wanted to eat at 'Ding Tai Feng' but the queue was too long and the menu was identical to the one at Singapore so we gave up our queue number. We ended up eating at the basement2 japanese restaurant instead. Food was so so but at least it was quiet and there was no queue. :) After that, we went back for an early night and to start packing our stuff.

Day5, after an early breakfast, we took a taxi to the Weekend Jade market and bought some jade souvenirs. Since we were not experts on jade, didn't dare to buy expensive items so the most exp piece I bought was a NT2000 jade pendant with crystals. After checking out, we went back to ShinKuang Baihuo to buy some lipsticks for my MIL (ended up buying the Elizabeth Arden Xmas make up set), then we gobbled our lunch at Heji again. Then it was back to the hotel and the tour guide brought us to buy some fruits enroute to the airport. Our flight was 6pm and we reached Sg at 1030pm. 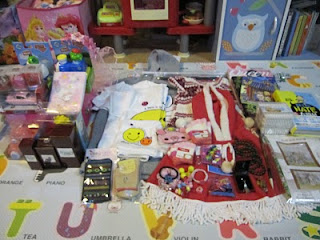 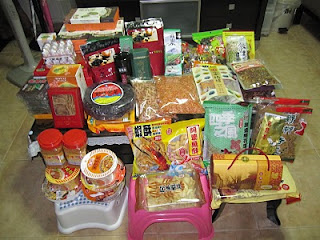 Flight was quite turbulent and I even spilled water all over my shirt. Luckily we came back in 1 piece and stayed up till 3+am to unpack, organise and take photos of our loot. We almost exceeded the baggage limit of 50kg, never bought so much before. I'm sure we can't shop like that if the kids were with us. hee. :P

Thought I will miss the gals so much (plus they were having diarrhoea the day before we left and we even brought them to see the GP near ILs house) that I won't enjoy the trip but I was wrong. I hardly missed the kids while at Taipei. Partly I did the missing before I left and also because I told myself, spend so much $ to go on holiday, must enjoy myself thoroughly and don't worry about things at home anymore. It was a good R&R trip with hubby. Felt recharged upon coming back to see the kids again. :)
Posted by Piggy Family at 11:54 PM