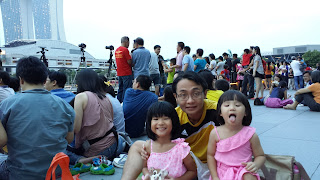 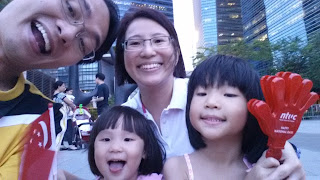 The initial plan was to book 1 night at Marina Bay Sands on National Day so that we can enjoy the fireworks close up while watching the National Day Parade on tv in the comfort of our hotel room. But that plan did not come to fruition because there is a minimum 2 night booking for National Day and 1 night was $599++ for MBS. So two nights would have easily cost $1300? Faint! If I have that kind of budget, I might as well bring the girls on a short holiday.

So when I received an email on the NTUC U family 'Baby Day Out' on 3 Aug to watch the fireworks for NDP Preview, I quickly registered. The event was free anyway. We set off late cos after Yamaha music class and lunch, we were tired out and had a nap. We did not drive as there were road closures plus we weren't sure where exactly was The Lawn. Unfortunately, the taxi driver we engaged was equally clueless. When we finally reached the lawn, it was already almost 6pm. The place was crowded and no good spots were left for a picnic. So, in the end, we registered, got our goody bag and left.

We went back to Marina bay link mall, had dinner at Swiss bake. Then we bought water and chips at 7-11 and crossed the underpass back to the bayfront where we had seen some families with picnic mats when we were trying to locate The Lawn. The picnic mat included in the NTUC goody bag was very useful so we settled down nicely at around 7pm waiting for the fireworks.

Forgot that this year's NDP was extra long so instead of fireworks at the usual 8pm, it only started around 820pm. The gals were busy munching on their cookies and posing for pics at first. But when the sky grew dark with no fireworks in sight, they started to bombard me with the same question: "Mummy, why no fireworks?" Duh... 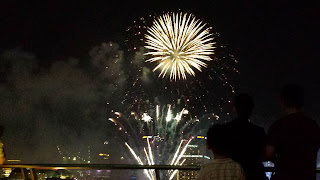 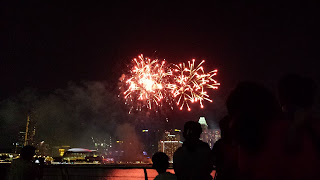 When the fireworks finally started, they went oohhh and ahhhh cos it was so beautiful to see them on close up. This is their first time. Since we did not ballot successfully for NDP tickets again this year, this is a cheap and good way for them to enjoy the fireworks. We had to walk more than 10 mins back to Raffles Place mrt station to take the mrt back but the gals didn't mind. They were thrilled that we were taking mrt train because we hardly take the train plus their favourite double decker bus. 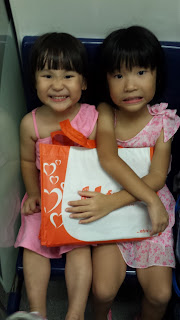 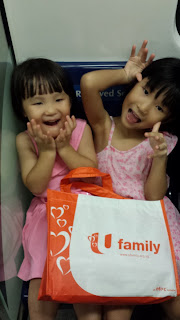 Wish we discovered this way of watching NDP fireworks earlier. But better late than never, maybe we can go back again next Fri or next year. ;)
Posted by Piggy Family at 12:43 AM

Hi, I'm new to Singapore. This will be our first national day celebration. Do you mind to let me know the place you accidentally discovered to see the fireworks? Which MRT station and the direction to go from MRT station. It seems like it's a good spot. Have a good holiday for you & family :)

Hi, u can take the mrt to Raffles place or Bayfront station and walk towards marina bay financial centre. The waterfront is just in front of the financial centre, u can use the exit at the marina link mall. Enjoy the fireworks.