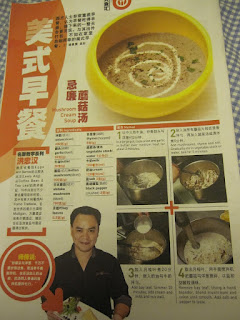 The gals love mushroom soup so we always order it when we go to western restaurants. Was browsing MIL's i weekly and I saw a step by step recipe for mushroom soup. It looks good so decided to buy some mushrooms when it was on offer at NTUC recently. Was also motivated to put the new NTUC bowls I bought to good use. kaka.

To be honest, I never knew cooking mushroom soup is so much work cos I grew up with campbell soup. My mum can't cook western soups so for any western soup, my dad who was a canned food hawker, will take a can of campbell soup from his inventory, open it, add a can of water, stir until it boil. Voila! Soup is done. My FIL does this too when the gals have dinner at their place and they didn't cook soup. hee.

Preparing the soup took almost 1 hr. It will take up to 2 hrs if I included the time I took to boil vegetable stock. (how I wish NTUC sells packet veg stock like those swanson chicken broth) No wonder restaurant mushroom soup tastes so good.

I modified the recipe a little cos I only had 1 onion in the house (defnitely not 200g) just couldn't find thyme (fresh nor bottled). It was oos even at NTUC Tampines Mall. Cold storage probably has it but I am too lazy to walk to Tampines One. :P The recipe asked for bay leaves too so I had to buy a bottle, hubby being the 'chin chai' chef, kept telling me to omit all these 'exp and seldom used' herbs. But I was worried it will affect the taste.

But luckily, the gals loved it. RaeAnne said it was better than pastamania soup and Raelynn said 'Yummy Gumbo' - that's her highest level of praise for food after watching The Princess and the frog. ;) So at least it was worth the effort. With soup, we still need a carbo so I just fried a easy tomato macaroni since we haven't had that for a long long time. ;) 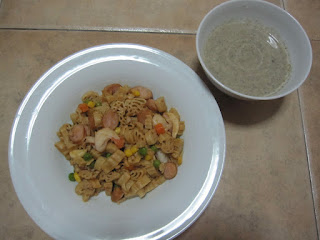 P.S. Recipe for veg stock
1) 3 stalks of celery
2) 1 onion
3) 2 medium carrots
4) 5-7 cloves of garlic (washed but unpeeled)
5) Some mushroom stalks
Just put everything into a pot of cold water until it boils then let it simmer until stock is sweet.
Posted by Piggy Family at 10:50 PM

Yippee! Pauline, your blog is back alive!
keep it up! I love reading your blog as it always inspired me on what to do for the kids!- Ping2

Ping2, haha, school holidays so got more time to blog. Thanks for your support! ;)