It all began when RA learnt about modes of transportation in school in the beginning of the year. She said Teacher Samantha told her there are hotel rooms in the big ship and asked me if it's true. Told her that it's true and that's called a cruise ship and there are many rooms inside a cruise ship. She was awed. And I promised her that when Mummy has saved enough $, I will bring her on a cruise ship.

December was a good time to fulfil that promise. Since we had already gone to Taiwan with the extended family in June, I didn't want to go anywhere far. So decided to bring them on a 3d2n cruise to Malaysia on 19-21 Dec. Especially booked the theme cruise with Nickledeon on board so that they can get up close and personal with Dora, Spongebob square pants and gang. ;)

Although we were staying in balcony class, our balcony class privileges ended once we checked in and collected the room key cards at 830pm. After that, everyone (whether balcony class or the other world cruisers) joined the super duper long queue to clear customs then get on board Super Star Virgo. Thought it wasn't fair since their marketing material said balcony class will have boarding privileges. The kids didn't mind the long queue, they were busy running about and playing with the queue posts. But hb and me were getting frazzled pulling them back in line, there were lots of people esp indians and people try to cut queue if you are not alert. :P

Anyway, once we got on board at 9+pm, we were given welcome drinks and that helped to cool down the hot tempers. We went to our room after 1-2 cursory photos at the lobby. After studying the programme, decided to go to Activity Centre, Deck 12 to sign the gals up for Nickledeon Tea party with Dora and gang tomorrow morning. It is not free though, each kid is $12. But I reckon since it's a Nickledeon cruise, I should just let them try it out. Charlie child care centre was having an open house from 10-1030pm but I only realised at 10.15pm so the gals had fun for 15 mins at the ball pit, drawing and colouring.

Then, we went for supper at the Pavilion (the chinese restaurant). Food was good, 5 dishes including 1 whole fried fish, gnor hiang, fried egg, steamed minced meat patty, stir fried vegetables. I had my favourite teochew 'muay' with side dishes too. We were persuaded by the waiter to order a warm soy milk for the gals and that cost $7.50. Omg!

There was a magic show at 11.15pm and we weren't sure if the gals will be able to stay awake or understand. But once we told RA about it, she said she wanted to go. Thought since I let them nap at home till 6pm today, they should not be that tired. So off we went to Lido at Deck 8. We were a bit late so we had to sit at the back, the figures on stage were a bit small and there were no kiddy booster seats so RL sat on my lap but RA managed to sit on her own. RA enjoyed the magic, RL didn't really understand the whole show but with the laser lights and music, she had fun too cos she didn't fidget nor ask to go back. :)

We went back at 12.15pm and after the daily bedtime routine, the gals finally ko at 1.30am.

Day 2
For some reason, I woke up early at 5am, so went for breakfast at Mediterranian buffet restaurant at 630am. After that, popped by the casino since there is no entrance fee unlike RWS. Went back at 8am but everyone was still sleeping soundly so I went back to the casino again. Left again at 840am and they were still sleeping but just as I got comfortable to take a short nap, RL woke up. So, we freshened them up and after some milk, we went straight for the Dora tea party. Food was provided for the kids eg. mini burgers, nuggets, mini cup cakes, fruits etc. 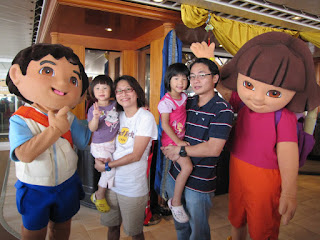 The tea party was a bit chaotic because the organisers did not restrict the number of pre registered participants. They had 70 over kids who pre registered and there was not enough seats for every family. Luckily, we reached 5 mins ahead of time so we got a table but even then, it was only a partially sheltered table. With the bright sunlight, RA and RL had difficulties keeping their eyes open for photos at the table. Dora, spongebob and company finally arrived at 1030am, and everyone was allowed just 2 photos each due to the crowd and lack of time. 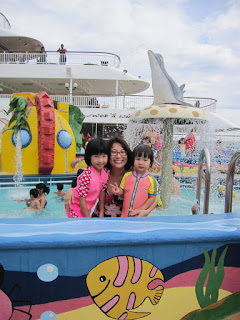 We went to the kiddy pool after that. I deliberately chose our room at Deck 10 cos it's at the same level as the pool and very near to walk. RA enjoyed the warm water at the jaccuzi and both gals enjoyed the slides. The end of slide was deep water of about 1.2m so Daddy had to stand by to catch them as they come down though.

After showering, we had lunch at the Japanese restaurant since we still have dining credit. The gals liked the miso ramen. After lunch, we went back to the room to rest but only RA and me napped. RL couldn't sleep so hb brought her to walk around the ship. He didn't manage to knock her out though. We had afternoon tea then went to the Nickledeon Arts and craft session which was free and the gals got tattoos too.

It was makan time again, so this time, we went to Bella Vista for western set dinner. We ordered 4 mains cos the kiddy meal was just nuggets with mashed potatoes and the gals didn't like mashed potatoes.

Food was good but it took a long time to come and RL threw tantrums and had crying fits there cos she had no nap and was cranky. Hb had to carry her away for a walk. But luckily after some soup and bread, her mood brightened.

There was a musical show called 'Somewhere in Time' at 9.15-10.15pm at the Lido. As usual, the gals wanted to go for it. Besides the usual song and dance, there were also quite a few acrobatic and gymnastic performances. RL likes it so much that she danced and clapped and even shouted 'Yeah Yeah, 你真棒!' Daddy was slightly embarrassed but I love musicals and glad that at least one of them likes it as much as me. I am also secretly pleased the shows are inclusive cos on my own, I wouldn't have bought exp tickets for them to watch such shows esp if I dun know if they are still too young to understand. 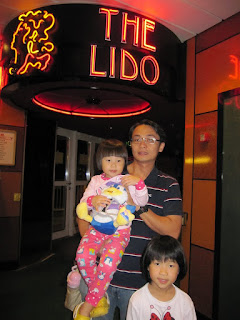 We strolled around the ship after that, and we went back to the room to rest earlier since RL is tired. They fell asleep at 11+pm that night. :P

The gals woke up late at 930am so we went straight for BF at Mediterranian Buffet which ends at 1030am. After BF, let the gals decide what to do with Daddy cos I wanted to go back to the casino to play a bit more plus get back my ecash. Didn't realise that they close early at 11.10am so I only played 10 mins and the ecash machine was spoilt so I can't even get back my $ unless I go and queue at the super duper queue at the main reception counter.

Came back to tidy up our belongings and prepare to check out by 12noon. The gals and daddy were at the video arcade. After showering both of them, we took our luggage and went for lunch at Blue Lagoon, we still had some dining credits left so it was time to use it up. After lunch, it was a long queue again to queue and pay, so we finally left the ship close to 2pm.
Posted by Piggy Family at 12:46 AM