We finally drove to LEGOLAND in our own car last Sat. Must really thank our neighbours Lijia's parents for patiently showing us the way. Previously, we took the coach bus and hired our own van driver. Although the drive to Tuas is quite long, both gals napped in the car as we left Tampines around 2pm after their music classes. But we cleared both sides customs quite quickly, RA woke up at Tuas checkpoint and RL woke up at Malaysia checkpoint.

When we reached LEGOLAND, it was around 3+pm. There was hardly any queues so we went for the rides that we did not try previously. When we went in Dec last yr, we only tried the boat ride, the train and mini land cos the queues were too long.

This time, the first ride we tried was Technic twister ride (like those teacups). Only RA got to try it though. RL is only 96cm tall so she couldn't meet the height limit for quite a few rides. She did not meet the height limit of 110cm so she could not play the Technic twister so I accompanied her. Both gals wanted to play the Aqua zone waveracer ride but RL did not meet the 100cm height limit. By then, I bought them a single scoop of rainbow ice cream to cool off. So they were quite happy with their ice cream and did not feel disappointed.

Lijia and his Daddy went for the dragon roller coaster. No amount of persuasion could convince RA to try the junior roller coaster ride. So both of them ran to Forestman hideout, and enjoyed themselves at the multilevel playground. RL had a bit of abrasion on her thighs sliding down the metallic enclosed slide though. Next time, must remember to wear pants for her. We managed to watch one 4d movie on car racing though we missed Cheema cos there was a technical fault for the 515pm show. The air con was a welcome respite from the heat. We tried the Observation Tower ride this time too.

RL couldn't do the Kids Power station rope pulley ride either but RA enjoyed it doing it with Mummy, the slow n steady way and with Daddy, the fast and furious climb up. Both gals tried the Royal Joust ride, the beetle bounce, Lost kingdom laser gun game. Hubby and I even went for the Dinosaur island water slide ride. RA wanted to try the water slide ride too but failed the min 120cm, 6 yr old limit. She was very disappointed and sulked but I think it is too thrilling a ride for her. The height drop from 2-3 storeys was scary for me. RA even panicked on the gentle beetle bouncer so I think she could not have handled it.

We decided to upgrade to an Annual pass since we had already paid full price for our tickets RM140 for adults and RM110 for kids. Just needed to come twice and it will be worth it for the RM275 adult annual pass and RM210 kids pass. As long as Lijia's family is coming again, we can tag along. Haha.

We went for dinner with the other 3 families (Lijia, Benjamin and Shi Heng Kai, all from Elfa CC) at Absolute Thai at 8pm. Left LEGOLAND at 915pm and we were the last few cars there. Went to top up petrol at Shell station near checkpoint and reached home sweet home around 10+pm. 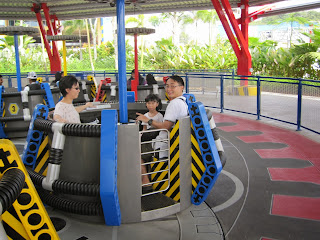 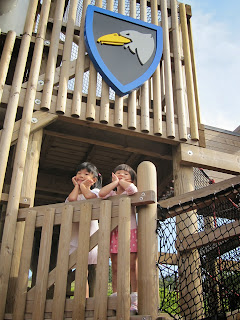 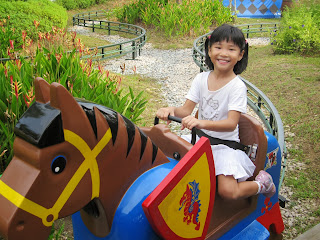 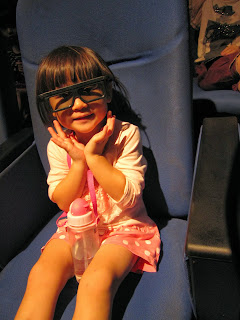 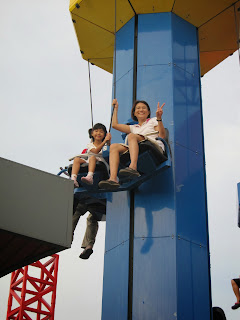 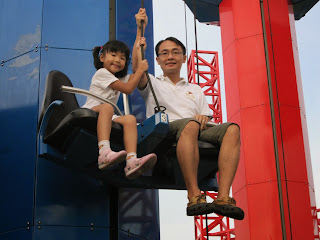 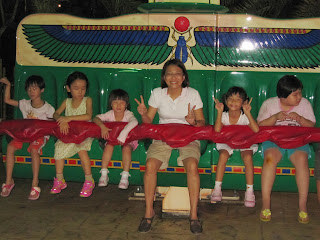