Another Milestone for RA - P1 Orientation 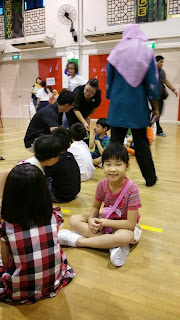 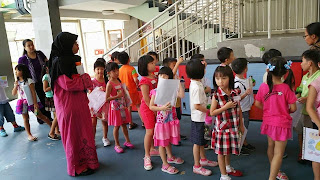 Today is RA's P1 Orientation. She reported to the hall at 145pm. When the teacher brought her and her classmates to the classroom and the school tour, mummies and daddies stayed behind to listen to the Principal's speech and watch the various video clips and presentations. RA said she watched a video story, did some colouring in class, and went on the tour of the school.

Today, we found out that recess time for P1 kids is 9am. Lessons end at 130pm. Add another 15 mins for flag lowering, dismissal and walking home, the earliest she can eat lunch is 145pm. Some of the single session schools give a 15mins snack break at 12 o clock for the students to eat something light in the classroom. But Poi Ching does not have this practice. All along they were operating on double sessions.

So myself and another parent gave our feedback but the P said it's fine. They can pack some biscuits in their bags. But if the teacher does not give them an official snack time, the kid will not dare to take the biscuits out of their bags to eat. I think more than 4 hours is too long for 6/7 years old to go without food. Duh.

After the P1 Orientation 2 hr programme ended, the few of us whose kids are in the same class formed a whatsapp chat group. There were 4 gals and 1 boy. Coincidentally, all the gals went to Crestar Ballet before.

Our conclusion is that we cannot give the kids a full bf since they need to eat again at 9am and they need to eat a lot. If not, they cannot last till 2pm for those who stay further away from school. No wonder kids grow skinny after starting primary school. :(
Posted by Piggy Family at 12:53 AM